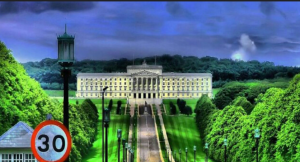 I have been complaining a lot recently about the lack of interest in the south over the north but I now realise this is just way we are as a people. There is a distinct lack of interest in matters beyond our own little worlds. And it is not because it isn’t important to us, but because we are preoccupied with what is happening on our doorstep more than what is going on in other parts of the country. All the moaning and complaining in the world isn’t going to make a difference.

Two Irish families are trying to exterminate one another in our capital city and introducing an EU wide and well-funded criminal empire into our country and it is hardly worth a discussion. Is it any wonder parties like Fine Gael and Fianna Fail get away with picking and choosing what matters they wish to promote and which get left by the wayside.

Ensuring water charges are introduced and an established private water utility regulator is in place either sooner for Fine Gael or further down the road when the heat settles for Fianna Fail are more important.

Perhaps a new Ireland including a north that is economically contributing is the only way to bring about an Ireland without water charges, without bin collection charges, with a fairer and more affordable health, education and welfare system as well as a total reform of our public sector and to bring wages, inflation and tax policies back into line for the betterment of the Irish people. The more overinflated our economy is, the harder it will be to make these corrections in a short to medium term.

Radical change is needed in Ireland and unification is one way we could bring this about, but it would require the 6 counties to be paying its way. I decided to google up on the reunificion of Germany and found the following paragraph very interesting:

“Thatcher, who carried in her handbag a map of Germany’s 1937 borders to show others the “German problem”, feared that its “national character”, size and central location in Europe would cause the nation to be a “destabilizing rather than a stabilizing force in Europe”. In December 1989, she warned fellow European Community leaders at a Strasbourg summit that Kohl attended, “We defeated the Germans twice! And now they’re back!” Although Thatcher had stated her support for German self-determination in 1985, she now argued that Germany’s allies had only supported reunification because they had not believed it would ever happen.”

More evidence as if we needed it of the duplicity of Britain. Unionism is making zero effort at reconciliation, they were always confident unification won’t happen from the GFA and there have been no efforts to even talk about any benefits to the Irish people that unification could achieve. James Molyneax said the IRA ceasefire was the worst thing that has ever happened to unionism. Perhaps reconciliation and moving away from unionisms sectarian stance on Irish equality is considered the next worst thing that could happen to unionism.

It is time more scrutiny is applied to unionism and more pressure is applied to removing sectarianism from all sections of our society starting with the unionist leadership and their political parties. Perhaps only then can we start talking seriously about the type of Ireland we want it to be.

52 Responses to ‘ Pride and Prejudice’ by Jessica McGrann