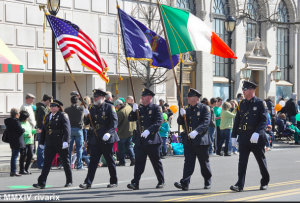 A few weeks ago. totally by chance, I discovered on You Tube a 90 minute documentary made in 1998 whose praises I could not attempt. I believe that only a curmudgeonly begrudger, and there are some of that stripe who tune in here,  would regard it as lacking in interest.

It was made by an American Public Broadcasting Corporation and  financially supported by the Jefferson Smurfit Corporation.It’s called “THE IRISH IN AMERICA::.THE LONG JOURNEY HOME: UP FROM THE CITY STREETS”
It opens with a shot of Brooklyn Bridge and claims that between 1880 and 1929 the Irish rose to rule New York from the sewers to the sky. The progress is illustrated by the
career of Al Smith who rose from very near the sewers to be Governor of New York, an unsuccessful Democratic Presidential Candidate in 1928 and figurehead of the Empire State skyscraper, the second highest in Manhattan when the documentary was made.
The film uses high quality still film and  motion film of silent and talkies from the era, music and  later commentary. The Great Hunger for food, shelter, jobs and security were necessities that knew no law.  Thievery, prostitution and rackets of all sorts flourished and many Irish were proficient in in them. The greatest of the rackets was politics and the smartest Irishmen, through the domination of Tammany Hall, robbed New York City blind. Al Smith (his surname Anglicised from the Italian Ferraro) was quarter Italian and quarter German) was identified as Irish, and did favours for political bosses, themselves unelected, before offering himself for election, and evolved into a reforming legislator from being a mere pawn of the racketeers. Along the way he’d been a music hall artiste of some skill. His Presidential candidature in 1928 was ill-timed for America was booming that year. He was also a city slicker with little rapport with non New Yorkers. He was also a Catholic in a country which in many states where anti-Catholicism was virulent.( I only recently learnt that Westminster’s Quebec Act, removing anti-Catholic restrictions in that province, was an American grievance fuelling its War of Independence.)
Though Tammany Hall was largely run by Catholic Irish, a West Cork born Protestant, Richard Croker, whose parents’  fortunes had declined in Ireland, was its most successful racketeer. Boss Croker was brought up in a shanty town later transformed into New York’s Central Park, a creation modelled on the public park in Birkenhead. His predecessor, Boss Tweed, had gone to jail, but Croker skedaddled back to Ireland with his loot. His horse “Orby” won the Epsom Derby in 1907.
The documentary is as entertaining as it is informative. Boss Croker’s funeral on 5 May 1922 was reported in THE TIMES  and is covered by his Wikipedia entry.
He was buried in the grounds of Glencairn House in South County Dublin after Requiem Mass in its private oratory,  conducted by the Roman Catholic Bishop of Eumenia.
“Pall bearers included Mr Arthur Griffith, President of Dail Eireann, the Lord Mayor of Dublin, Mr A H Flauley of Chicago, Mr Oliver Gogarty, Alderman MacDonagh and Mr J.E.Tierney. Mr Michael Collins, Chairman of the Provisional Government, was represented by Mr Kevin O’Sheil. Mr James MacMahon, British Under-Secretary to the Lord Lieutenant was also in attendance.”
Arthur Griffith died three months later from the stress of the Civil War. Alderman MacDonagh – Joseph MacDonagh TD died on Hunger Strike on Christmas Day 1922
and Michael Collins died in battle on August 22 1922.
Glencairn House is the residence of the British Ambassador.

View all posts by Jude Collins →
‘The Irish in WW1: forgetting and remembering’ by Donal Kennedy
On the use of violence for political ends

4 Responses to THE IRISH IN NEW YORK by Donal Kennedy