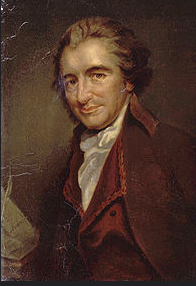 If you ask a random group of  ten freeborn Englishmen what the name Tom Paine means to them nine of them will never have heard of him. And the

tenth will probably tell you he was a crank or a traitor.
A crank he certainly was, if you accept the definition given by Francis Sheehy Skeffington – “an engine for making revolutions.”
His pamphlet  “Common Sense”  was the first to use the words “United States of America” and a successor “The Crisis” helped steel the resolve
of Washington’s sans culottes army in the cold at Valley Forge.
Paine’s “Rights of Man” defended the French  Revolution’s  “Swinish Multitude”  from the sneers of Edmund Burke and the pamphlet was described
by Theobald Wolfe Tone as “the Koran of Belfast”  when that city was in the van of democracy in Ireland. A dance tune in Paine’s honour, named “The
Rights of Man” attests to his inspiration of Irish democrats from their heads to their toes.
Tom Paine was born in Thetford, Norfolk, England, in 1737 and died in New York City in America in 1809. It took another 155 years before a statue was erected in 1964 in his honour in the town of his birth. The local MP stayed away from its unveiling, not because he was in ignorance of Paine’s life and principles, but because he deprecated both.
The erection of the statue arose from initiative of United States Air  Force men stationed in Norfolk.

2 Responses to AIRBRUSHED OUT OF HISTORY by Donal Kennedy