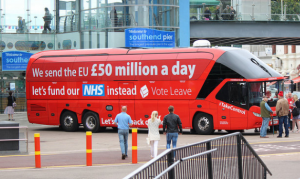 Let’s talk  about that £350 million first, shall we? The claim of the BREXITeers  during the campaign was that the NHS would be able to benefit from this glorious sum, since Britain wouldn’t have to pay it into the Brussels coffers. Hands up if you think that Boris Johnson and Michael Gove are the kind of people who are intent on giving new life to the NHS? That’s the NHS which was run down to the brink of privatization by their political enemy David Cameron? Mmm. Right.

Let’s talk about immigration. Is immigration concern sparked by the fear of losing jobs? Probably. Although it depends on what kind of job you have in mind. You won’t have seen doctors out shouting for BREXIT because too many EU doctors were coming to Britain. Or nurses. Or lawyers. It is in the lowest-paid jobs that fear of the foreigner has been most vocal. “They’ll work for less than us and we’ll have no jobs” was the essential complaint of the lowest-paid. And for that you blame the immigrants? How about legislation by the British government ensuring that everybody is paid a living wage. That way, the employers won’t be able to manipulate their workers  with zero hours and skinny wage packets.

Could it be that dislike of foreigners – otherwise known as racism –  and not jobs is at the back of the fear of immigration? Of course it could. Those most nostalgic for the old days when Britain made its own laws and was Great tend to be older people. They remember a time when the idea of a black man playing for England was laughable, never mind a black man in the White House. Or, come to think of it, in 10 Downing Street. People by and large dislike change; the vote to leave the EU was not so much a bold strike for a brave new world as a frenzied attempt to get back to the good old days.

So now what happens? Some three million people have signed a petition calling for a second referendum. Commendable as that is, in the cold light of Monday morning that gesture of defiance will remain only that – a gesture. The same applies to the call by the SDLP leader Colum Eastwood for our little statelet to withhold consent to BREXIT and so stop the whole process in its tracks. Likewise the call for a border poll. Both Gerry Adams and Martin McGuinness know that it won’t happen – now especially, with the BREXIT storm still raging. What talk of a border poll will do is reassure Sinn Féin followers that the party still has a reunited Ireland as its goal. It will also help lay bare the hypocrisy of Enda Kenny and southern politicians over the whole question of partition. Both Fine Gael and Fianna Fail are desperately anxious to avoid partition coming onto the political agenda, since Sinn Féin have a track record of seeking reunification and all southern political parties have a track record of being willing to do anything to avoid conceding that  their country – our country – was divided almost one hundred years ago. The occasional speech at Bodenstown, that they can manage. But for God’s sake don’t start doing anything about national unity.

Finally, another thought to warm the heart.  In the wake of the BREXITeers’ success, many people are clapping their hand to their brow and groaning “Isn’t this awful?” Well yes, it sort of is.  But when things are in flux, there is at least the possibility that the new patterns which emerge might be more desirable than what we had. This Monday morning, there’s more than one Scottish person thinking that. And quite a few Irish people as well.

57 Responses to Always look on the bright side of BREXIT