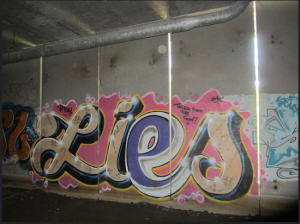 I believe in God but have a sneaking suspicion that He has a wicked sense of humour.
I believe too in a Great Devil, “the Father of Lies”  and I challenge anyone, hand on heart, to deny his amazing potency, evident all round us.
In London’s St.Paul’s Cathedral,  the tomb of its Architect, Sir Christoper Wren bears the suggestion –Si Monumentum Requiris Circumspice,
which translated into Sacs-Beurla –or The Twittering of the Saxons, means -“If you are looking for his monument – look around you.”
Another Monument, some few hundred yards from St Paul’s , stands at 203 feet high in Pudding Lane. It too is the Work of Sir Christopher
Wren and for its first 150 years  it was emblazoned with the legend that Catholics had caused the Great Fire of 1666. It t was a Blazing and
Brazen lie, neither the first nor the last Monumental Lie issuing from the incestuous union of the Mother of Parliaments and the Father of
Lies.
For 100 years, from 1915 until last year, the British authorities upheld the falsehood that Edith Cavell was innocent of spying, and that her
execution by the Germans was against the internationally accepted rules of war. The Daily Telegraph calculates that tens of thousands of
men joined the British forces, outraged  by the “crime.”  Is nobody outraged at how a generation of gallant youth threw their lives away
fooled by the Satanic falsehoods spread by a British Government?
There are people who profess to a belief in God who tell the greatest whoppers. The Irish Times has a feature called “Rite and Reason”
which might more accurately be labelled “Tripe and Treason” . Whether Satan would claim to be its inspiration I wouldn’t be sure, though
to give the Devil his  due, I think he has more brains.
There are many unbelievers who are honest men and women, indeed in my view, unrecognised saints.
But there are some  noisy and noisome propagandists who parade their unbelief whilst writing the most blatant falsehoods.
I imagine they draw great comfort from the conviction that it is not a sin to tell a lie, and that the Wages of Falsehoods are very Bankable.

View all posts by Jude Collins →
IT’S CAT MELODIAN !!…A CATASTROPHE !?
Always look on the bright side of BREXIT