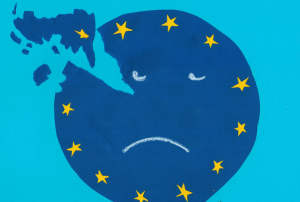 So will it work? Can Scotland and the north of Ireland make a legitimate case when they say that they voted to stay in the EU, while the rest of the UK – excluding London – voted to leave it?

Scotland has the stronger case, for the simple reason that Scotland has the possibility of a second referendum on independence for that country. Certainly Scotland’s First Minister, Nicola Sturgeon, is very keen on such a referendum being held. She figures this is the escape hatch from the UK through which the Scottish people can travel and continue their trading relationship with the rest of the EU.

And here in the north of Ireland? Unlike Scotland’s First Minister, our First Minister has no time for the argument that we voted differently from the rest of the UK (OK, Virginia, different from England [minus London] and Wales.) “It is regrettable that some parties have set their face against the decision of the United Kingdom electorate”. (No prizes for identifying who she’s talking about.) The Deputy First Minister, on the other hand, says “This is not a done deal. There is still a lot to be played for and we will be asserting the rights of those who voted to remain in Europe”.

So who’s right, Arlene or Martin? Arlene, I’m afraid. It was a UK-wide vote and the UK voted to leave. And we can assert our rights but that doesn’t mean we’ll get them. Arlene and the UK have allies in the EU: the Spanish prime minister and to a lesser extent the French president both are against a special case being made for Scotland, let alone the north of Ireland. Because they have the welfare of the EU at heart? Gimme a break. Because they have a separatist problem themselves with Catalonia, and the notion that Scotland or the north of Ireland could do their own EU deal, thus showing that a ‘country’ could fragment – parts of it in, parts out – is a notion up with which they will not put.

Scots at least have a lever: they can push for a second independence referendum, and if they get it, they’ll probably vote to leave the UK and rejoin the EU. Probably. We here in the north have no such lever. Enda Kenny is a lever? Um, no – a plank maybe, a lever  no. Enda is busy portraying the south as the British proxy at EU negotiations when the door is slammed in Cameron’s face and the twenty-seven other members are debating policy. It no doubt warms the cockles of David Cameron’s heart that the south of Ireland is a willing little lap-dog, doing its damnedest to protect Britain’s interests. But the EU has shown what respect it has for the south’s concerns when it arranged for their budget to be constructed in Berlin rather than Dublin.

Out of all this at some stage in the future, the north may make significant movement to national unity and rejoining the south in the EU. But except the south has a Pauline conversion on the road to Brussels, don’t bet the family farm on it.

27 Responses to BREXIT and us: Is Britain ‘waiving the rules’ ?