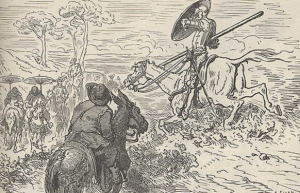 There’s a passage in “Refections On The Revolution in France” by Edmund Burke, which you’ll be glad to see, I haven’t got to hand. But it declared that the age of dhivalry was Dead, because Queen Marie Antoinette had been arrested at Versailles and not a gentleman in Europe had drawn his sword from his scabbard in her defence. This was some time before  anyone had laid a hand on her wig or contemplated parting her head from the rest of her.

A couple of centuries earlier Miguel Cervantes illustrated how  a superabundance of Chivalry could turn a man’s head and addle his brain. The romantic fool Don Quixote mistook windmills for marauding randy giants and wanton wenches for maidens in distress.  I’ve not read the book, one of many such unread volumes on my shelves,but generations of Europeans have laughed at the antics of the deluded old fool.
Perhaps I’ve no sense of humour, but the Daily Telegraph’s calculation that tens of thousands of chivalrous young men joined the British Army as a result of the lying propaganda regarding the activities for which Edith Cavell was shot I can’t find funny. Not funny ha ha. Nor funny peculiar either, for lying is the default, or normal position of the British State.
I would not suggest Edith Cavell was a wanton wench. The Church of England includes her in its Calendar of Saints and I believe she was doing her duty as she saw it. But she was a  spy and  she was shot for spying, according to the internationally accepted usages of war.
Many of the tens of thousands of deluded chivalrous young men perished, and many good men  died at their hands.
Perhaps the Age of Chivalry is dead. But the politics of deference, which Michael Davitt claimed had been killed by the Land League has risen from its grave. Witness the Western Front Association’s Irish branches, the shenanigans in the Irish Embassy in London, the Tara Street Walkers and  the monstrous regiments of sycophants.

View all posts by Jude Collins →
“YOU’VE GOT TO BE CAREFULLY TAUGHT TO HATE AND FEAR.” by Donal Kennedy
Dog catches EU truck: now what?

One Response to CHIVALRY by Donal Kennedy