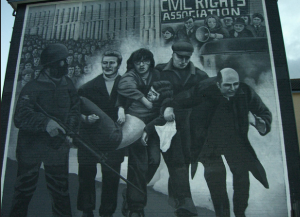 I’ve kept out of the Brexit debate so far. I’ve lived in Britain for 52 years and have never known a more poisonous atmosphere than the current one.

When the British media, with the encouragement of the British Government, were attempting to whip up an anti-Irish frenzy and anti-Irish  sneers, masquerading as jokes were the currency of entertainers, I was not frightened, nor do I remember other Irish people who were. I never pretended to be other than Irish, Republican, or Catholic, nor said “Amen” to those Irish humbugs who excoriated my ethnicity or beliefs.

But I have many neighbours long settled in a multi-ethnic London suburb who are now worried for their own and their children’s security. These are my fellow Europeans with white faces, good jobs and thoroughly fluent English. They were completely unworried a couple of weeks ago.

I never swallowed the lie that the EU had brought peace to Europe. How could I? On Sunday 23 January 1972 Britain’s Prime Minister  Edward Heath signed the Treaty of Accession to the European Economic Community and Taoiseach Jack Lynch signed for Ireland in Brussels.

Exactly one week later the British Army deliberately murdered 14 Irish citizens in Derry. None of the murderers was apprehended, charged or punished. The officer leading the unit which pulled the triggers was awarded an Order of Chivalry (OBE) by his grateful sovereign before the victims were cold in their graves. And a vicious war continued in the area for another 25 years.

The former YUGOSLAVIA (cobbled together by the Great War’s instigators, Britain and France in 1919) fell apart  after  West Germany encouraged Croatian secession and enveloped the former state in violence lasting for years.

Members of the European Union have participated in aggressive wars without United Nations sanction and continue to do so, and they arm and train regimes which are tyrannical at home and barbarous abroad. European powers have armed and equipped opposing regimes, for exampleIran and Iraq. Though Russia poses no threat to Germany, France or Britain, or Poland, Latvia. Lithuania or Estonia, NATO, led and inspired by the United States, stages provocative exercises on Russia’s borders. Though pretending to oppose ISIS, EU countries deplore Russian support for the internationally recognised Syrian Government, the only body there which does not murder Christian or other minorities. The Europeans, under apparent American direction, arm and train disparate bodies of fanatics who are in rebellion against the internationally recognised Government.

22 Responses to DON’T MENTION THE WARS by Donal Kennedy