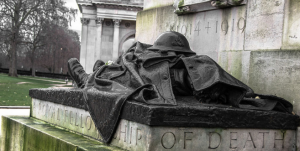 Two German Officers are the heroes of my story, for they dispel the fog of Military History as it is currently presented in Ireland.

The first of these gallant gentlemen, following the defeat of the Kaiser and his own demobilisation, was ce-Commissioned in the Irish National or Free State Army, established its School of Music and conducted the No.1 Army Band. His name was Colonel Fritz Brase. The band cut a number of records in 1930,“Fantasias” , or medleys of Irish airs. Amongst my heirlooms are Fantasia No.1 and Fantasia No.4. The very first air of Fantasia No.1 is The Foggy Dew. Immediately following the 1916 Rising this traditional song had a new lyric, celebrating the Insurgents’s gallantry. But it cast no slight on those other gallant Irishmen, “the Wild Geese” whom Brittania bade fight in British uniform “that small nations might be free” and “whose lonely graves were by Suvla’s Waves and the Shores of the Great North Sea”. “Suvla’s waves” are by Gallipoli. Free State Government Ministers and most Senior Free State Army Officers in 1930 had been insurgents in 1916 and had there been any animus against their compatriots, often their brothers, who fought at Gallipoli, it is unlikely that The Foggy Dew would be such a favourite with them.

My second German Officer, Lieutenant General Liman Von Sanders, commanded the Turkish 5th Army which defended Gallipoli against the British and Anzac attack. Von Sanders paid particular tribute to the Irishmen who confronted him. My father used quote that tribute by heart. It was relayed to later generations of Irish schoolchildren in a standard history textbook—Volume IV of A Textbook Of Irish History by James Carty, first published in 1931. In 1930 and 1931 Cumannna nGael under W.T. Cosgrave was in power.

In the 1950s de Valera’s Irish Press, a Fianna Fail organ, used run a Saturday column by Brendan Behan which celebrated with great humour the Dubliners amongst whom he (Brendan) had been reared, many of whom had served in the British Army in the First  or Second Boer Wars, or were the widows and children of the same. He recalled being amongst them at a film, advertised in Dublin as “Gallipoli” but in its country of production “Tell England”.

Also in the 1950s I often read the monthly United Irishman the organ of those Republicans who regarded both de Valera and Cosgrave as lapsed or apostate separatists. I vividly recall a piece on the Irish sacrifice at Gallipoli. It cited a British Officer surveying a landing beach through binoculars and asking—”Why are our men resting?” The poor men had no choice, being dead.

So I was surprised to read a book review by one Harman Murtagh in The Irish Times of February 11th last asserting that official Ireland had airbrushed the story of the Irish at Gallipoli out of history.

Under W.T. Cosgrave and under Eamon de Valera the story was told though, when Liam Cosgrave was Taoiseach, songs such as The Foggy Dew were banned from the air waves by the diktat of Labour’s Conor Cruise O’Brien.

I was disappointed when the Irish Times didn’t publish my rebuttal of Harman Murtagh‘s assertion, or any other challenge to it. And I was rather bemused to learn that Harman Murtagh is President of The Military History Society of Ireland, whose journal is The Irish Sword.

Mr. Murtagh‘s baseless assertion was repeated in the Irish Times by one P.D.Coggin on July 19th. P.D.Coggin is a former officer of the Irish Army and unfortunately knows little of its or his country’s history. He was a guest writer for An Irishman’s Diary. Again the paper published no challenge to his assertion. It’s a sad day when one must invoke a couple of German officers to blow away The Fog of Military History and the Smoke Screens laid down by alleged scholars and gentlemen of My Own Dear Irish Home.

P.S. This piece was published in THE IRISH POLITICAL REVIEW in January 2012.

View all posts by Jude Collins →
BREXIT and us: Is Britain ‘waiving the rules’ ?
DON’T MENTION THE WARS by Donal Kennedy

11 Responses to ‘ Gallipoli, Two German Officers And The Fog Of Military History’ by Donal Kennedy