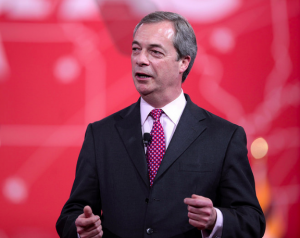 Sometimes – in fact almost always- disastrous political events make edge-of-seat TV viewing. I remember Watergate and the slow political death of Nixon. I was living in Canada at the time and night after night, the American network channels came on with yet another jaw-dropping development as  the tide of deceit and brutality grew higher and higher, until Richard Nixon finally went down glugging his resentment.

The political events we’re living through aren’t quite as gripping but they’re near enough, near enough.

Take the Brussels parliament yesterday. Nigel Farage showed how life can imitate art, almost down to the exact dialogue. When the shambling Jonah Ryan character in Veep gets elected to Congress, his first words in his acceptance speech are directed at his high school classmates who always claimed he’d amount to nothing. “Well, who’s laughing now?” Jonah yells. In Brussels yesterday, Nigel Farage: “Seventeen years ago when I said I wanted Britain to leave the EU, you all laughed. Well, you’re not laughing now!” In fiction, it’s a hoot. In reality, it’s undignified and truly nasty. But riveting viewing.

Aly Smith, the SNP MEP, got to his feet waving a map of Scotland and calling for “cool heads and warm hearts”, as he begged the EU “not to let Scotland down”. At which point  the rest of the parliament rose to their feet in thunderous applause.

Martina Anderson had a go at a reprise of Smith’s performance: “If English votes drag us out of the EU, that would be like Britannia waives the rules again!”. I’m not sure how many of the translations caught her play on words, but the acceptance of her words, delivered with unbridled passion (have Sinn Féin put something in her porridge recently?) was clear. The EU now know, if they ever doubted,  that parts of the UK are unhappy, even angry with the idea of leaving Europe.

Back in Britain, we had a ringside seat as Jeremy Corbyn called a meeting of Labour MPs. The result:   loads of empty seats. Beside Corbyn his deputy party leader Tom Watson looked like someone on a date wondering  how the hell he can get away? The BBC obligingly gave us sub-titles so we could see that Corbyn was telling his spin-meister Seumas Milne  that he didn’t think this was a good idea, and almost instantly the meeting was abandoned.

Much politics must be unbearably tedious, as  wind-bags  in love with the sound of their own voices chunter on about some pet project.  Over the past few days Brussels and London  have given us a ringside seat to watch the political gladiators fight to the death.  There are those who detest Gerry Adams, and especially his tweets. But with masterly understatement he summed up what we’re all going through at the moment: ‘Interesting times’.