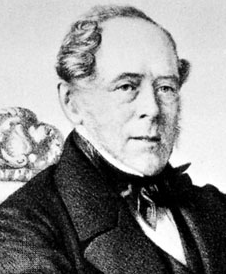 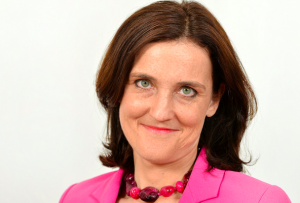 The Villiers family have previous experience of interfering in Irish affairs – the present British Secretary of State had an ancestor, George Villiers, Earl of Clarendon. He was Lord Lieutenant of Ireland during the late 1840s, and he did his bit for Queen and Empire. At a time when Ireland was in the hellish grip of mass starvation and mass emigration, Villiers used coercive legislation to put down outbreaks of violence among the natives, established a number of relief projects that were totally useless, and introduced agrarian reforms that encouraged English landlords to speculate in Irish land. For his services Queen Victoria made him a Knight of the Garter.

How does our present Villiers, British Secretary of State Theresa compare?   Theresa Villiers was a major proponent of Brexit, so of course she’s now deeply pleased that her country has been freed from European shackles. She doesn’t believe in other countries interfering and making law for her country. In February of this year, she declared that it was time for Britain “to take back control over our country and making our laws and controlling our borders”. It is not reported whether she then went into a fit of uncontrollable giggling as she, the British Secretary of State for Northern Ireland, realized the irony of her words.

Now, in the final days of June, Theresa still is calling the shots for the people in this part of Ireland. She has met Sinn Féin’s call for a border referendum with a firm negative. No referendum, Martin, sorry. Well actually, to be honest, not a bit sorry. But no referendum anyway.

How does our British Secretary of State decide there shouldn’t be a border referendum? The Good Friday Agreement, daftly in my opinion, declares that the British Secretary of State would need to believe that such a poll could be won before calling it. You may think this gives the SoS far too much elbow-room. She could just feel in her gut that a border poll wouldn’t succeed, she could refuse because Boris Johnson told her it wouldn’t be a good idea and she thinks he’ll soon be British prime minister.

But actually Theresa hasn’t gone with her gut or Boris. She’s given as the reason for her No that all the opinion polls indicate there is no appetite for such a border referendum and so it won’t be called.

EH? That’s polls as in the polls that said the Remain camp would sail to victory earlier this week? You cannot be serious, Theresa. Although come to think of it, you may indeed be having a little giggle here too. All power is delightful, as Idi Amin once said, and absolute power is absolutely delightful.

24 Responses to Ireland and that Villiers touch