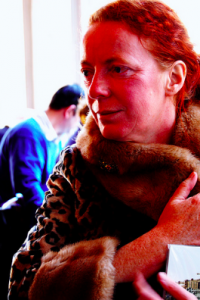 Well may you ask “Who is Rosita Boland?” and “What is she good for?”

She’s awfully pleased with herself for asking the question in THE IRISH TIMES  – “IS IRISH REALLY NECESSARY?” . She’s a bit of a fixture at the paper I think of as “THE STRUMPET CITY CARRIER”, many of whose staff I classify as  the “Tara Street Walkers.”   As, God help me, I have frequent recourse to that paper, I should be alarmed that it wants clients criminalised and those that solicit considered innocent.

I see from Wikepedia that Ms Boland is a graduate in journalism from Harvard and that she has published volumes of poetry. I believe that, as  Benthamite Utilitarians, Lord Macaulay wanted to demolish the Taj Mahal, and Daniel O’Connell would have been happy to see Irish disappear. The Taj Mahal survived, because it would have been more expensive to destroy than to leave standing. The Irish people perished in their millions as food was exported under the bayonets of British troops because, as one of O’Connell’s well-fed sons exulted that they would rather see their children starve than deprive the landlords of their rents.And the Irish language almost died out.

Music, Art, Poetry, Literature and Drama mean nothing to those who know the price of everything and the value of nothing, and they would say that they are not necessary.They would be wrong, for without them we would not be human.

To live in Ireland and have no knowledge of Irish is like being blind in one eye and deaf in one ear. On the DART a few months ago on the South Side I appreciated the sense in having the stations designated in Irish and English. As a born Northsider I’d heard of Glenageary but learned that it is a corruption of GLEANN NA GCAORACH – the Glen of the Sheep. Some years ago at the top of a hill in Co Carlow I saw the meaning of “CARNEW” which might have been a garage sign. Its real name is “CARN AN BHUA, one to  recall ancestral huzzahs, for it means “THE CUP OF VICTORY”, commemorating some feat of arms or legs in olden times. If such names don’t stir your blood you are scarcely human and certainly lacking a poetic temperament.

5 Responses to IS ROSITA BOLAND REALLY NECESSARY? by Donal Kennedy