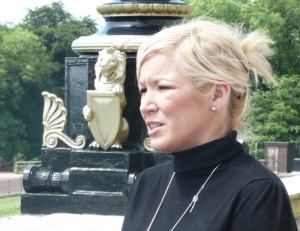 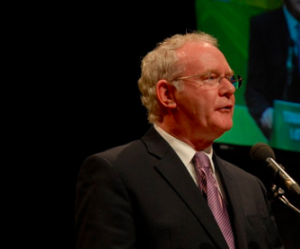 Two Sinn Féin members of the Executive made the news yesterday. The new Health minister, Michelle O’Neill, announced the end of the ban on blood donation by gay men. The Deputy First Minister, Martin McGuinness, visited the site of the Battle of the Somme and laid a wreath there.

Were both moves welcomed? Certainly not by their partners in the Executive, the DUP. Michelle O’Neill’s move may have been welcomed by gay men here, but the DUP’s Sammy Wilson chose to murmur about danger and the need to be sure there is a properly regulated system of blood donation. The fact that Michelle O’Neill said she took the decision on the basis of medical research and evidence didn’t seem to cut much ice with Sammy – or his DUP colleagues, judging from their silence. The fact is, Michelle O’Neill’s move on blood, while simply bringing this region into line with the rest of the UK, highlighted the fact that former unionist Health ministers had chosen to ignore or dispute accepted medical research on the topic. So Michelle got to do a good thing and at the same time score a point off the DUP. They may be partners in government bent on a Fresh Start, but that doesn’t mean Sinn Féin won’t happily snaffle up a score against unionist politicians.

Martin McGuinness’s wreath-laying at the Somme, whatever else it is, represents yet another effort by the Deputy First Minister to make gesture of reconciliation towards unionism. Will it be reciprocated in some way? Pretty unlikely. McGuinness made clear that he’d placed the wreath yesterday rather than on the anniversary of the battle, when the major commemoration ceremonies will take place, because some unionist leaders had said they wouldn’t attend if he were there.

In some ways I have sympathy with these hard-line unionist people. It must be galling to have a man who was prominent in the armed action against British forces here now to have a respected place at the heart of commemorating  a battle they revere – just as it must be galling to see Mr McGuinness the co-equal First Minister of Northern Ireland. On the other hand, do these rejectionists plan to have a future in which all old grudges and resentments are nursed and fed? Martin McGuinness would have his own feelings of resentment towards the British armed forces, starting with events such as Bloody Sunday in Derry, but he clearly has put these aside in order to show good will and flexibility on the part of republicans. In the end, McGuinness’s willingness to attend the Somme site and unionist refusal to attend Somme ceremonies if McGuinness were there, summarises the problem of creating a better future. Republicanism – or that branch of it represented by Sinn Féin – is clearly keen to melt past antagonism into present acceptance and even warm relations between unionism and republicanism. Unionism, in the form of its leaders, appears intent on hanging on to old resentments.

Will media reporting now emphasise this basic difference in approach by the two parties? Don’t hold your breath. The old one-is-as-bad-as-the-other requires so much less effort and besides, it lets you claim you’re objective and balanced.

One final point. More and more nationalists/republicans are getting fed up with gestures such as Mr McGuinness’s Somme wreath-laying, with no hint of movement on the opposite side. If this continues, Sinn Féin may be forced to present a rather more hard-knuckled attitude to unionism. Which might be welcomed by considerable numbers in the nationalist/republican community, but would be welcomed by even more unionist politicians. It’d mean things had got back to the more predictable black-and-white days. This ex-IRA-man-at-Somme-wreath-laying is very confusing.

66 Responses to Michelle and Martin: a move each, while unionism watches