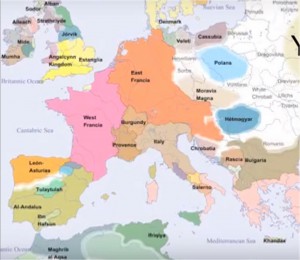 There is much talk about national identity and culture in the news which appears to have come to a head with the vote to leave the EU.It’s a fact that the very idea of a “national identity” is a fairly recent construct anyway. The whole idea of having a country or even a nationality to call your very own ,ruled by a democracy or a king or dictator, peopled by individuals who cleave to a nation state who are entitled to self-determination is a curiously recent idea in world terms, but you’d think it had been set in stone forever by such bodies as the United Nations.It’s best to remember that no matter how much you might feel to be “Irish”, “English” or “French”, there’ll be someone in the world who will never have heard of your country of origin and in fact your country’s name might only be a passing phase anyway. It may be changed or forgotten within another couple of hundred years. Before we had countries there were a variety of tribes with such exotic names as Lombards, Suevi, Franks, Burgundians, Franks, Siling Vandals, Asding Vandals, Visigoths, Ostrogoths, Thuringians, Bavarians, Alemanni, Saxons, Angles,Jutes, Danes, Norwegians, Normans,Icelanders and Swedes

24 Responses to NATIONS AND IDENTITY