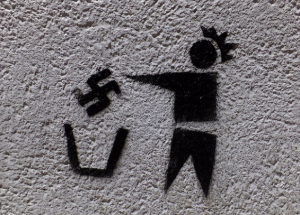 Twice in eleven days this month THE IRISH TIMES, which in March 1933 welcomed the accession of  Hitler to power in Germany, has carried articles seeking to associate Eamon de Valera and Fianna Fail with Fascism.

In “An Irishman’s Diary” (June 27) one Mark Phelan says that Fascism featured heavily in Irish public discourse long before the Blueshirts and that Mussolini apologists honeycombed both Cumann na nGaedhal and Fianna Fail.
On Saturday June 18 the IRISH TIMES carried a book review by veteran Fine Gael politician and historian Maurice Manning of a biography by Professor Tom Garvin, of Daniel Binchy, Irish Minister to Germany 1929-1932 saying Binchy had advised Cumann na nGaedhal (in Government during his tenure) and
Fianna Fail under de Valera, about the dangers of fascism. Fianna Fail and de Valera are identified by name as if they were particularly susceptible to
Fascist sympathies.  I know that Oliver St. John Gogarty, a Senator appointed by W.T.Cosgrave of Cumann na nGaedhal, was  virulently anti-Semitic from his youth and never grew out of it. And that Fine Gael’s Oliver Flanagan stood up in Dail Eireann in 1943, praised Hitler’s treatment of Jews and asked for the expulsion of Jews from Ireland. I know that Flanagan tried to implicate Sean Lemass in some business scandal and that a tribunal treated Flanagan’s sworn testimony as perjury, none of which damaged his long political career. He became Minister for Defence. Flanagan was a “cute hoor” full of piety as a Knight of  St.Columbanus,never knowingly absent from a constituent’s funeral.
And then there were the Blueshirts and its strutting would- be Duce, General Eoin O’Duffy ignorant as Pigshit. My mother told me she saw women kneel at his feet in Dublin and kiss the seams of his trousers. And John A Costello, the distinguished Senior Counsel,and his silly boast that as the Blackshirts
had taken power in Italy and the “Hitler Shirts” in Germany, so assuredly would the Blue Shirts in the Irish Free State. As an Irishman I would not normally
want to air the nation’s dirty Blue Shirts, Black Shirt and “Hitler Shirt” Wannabes in public, but they’ve asked for it.
How can any informed or honest person dealing with Fascist leanings or activities in Ireland not name the persons involved?  How can anyone who
is not a damnable liar tar de Valera with a Fascist Brush, or mention him in the same Breath as Salazar or Franco who never ran for office, or espoused
or tolerated democracy.
Throughout his political career, with Sinn Fein and with Fianna Fail, de Valera was a democrat and while he led them both parties were    democratic and
the very antithesis of Fascism. For his personal business he employed Protestant, Unionist Solicitors, and he was a personal friend of the Chief Rabbi Herzog, as that Rabbi’s son, ex-President Herzog of Israel, recalled in his memoirs.
In 1934 William Edward David Allen,  very wealthy  Old Etonian, who had been Unionist MP for West Belfast, writing under the pen-name “William Drennan”
described Edward Carson as “the Leader of the First Fascist Movement in Europe.” Allen meant it as a compliment , he was a member of Mosley’s
British Union of Fascists, was writing in the BUF Magazine, and was a personal friend of Mosley and one of his financial backers. When Lord Carson died in October 1935 THE IRISH TIMES lamented that he had been born 40 years before his time, otherwise ” he might have been a Mussolini, or even a Hitler.”

View all posts by Jude Collins →
Sport and politics don’t mix? Ask them in Iceland
Must all now accept BREXIT, like it or lump it?