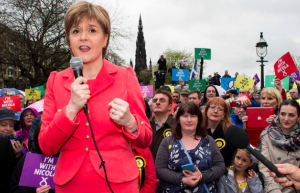 Where’s the euphoria? Are Boris Johnson and Michael Grove doing leps and yips inside but showing the world their sober face, in case people might see them as power-hungry fanatics gloating in victory? Or are they in fact genuinely a bit scared at the monster they’ve created, which threatens to run havoc through Britain, including putting at risk the composition of the UK itself? Hard to say – I’d lean towards the first, given the monstrous egos of both men.

Meanwhile, the word this morning is that Nicola Sturgeon figures the Scottish Assembly must give its imprimatur to the BREXIT referendum result, and she won’t be encouraging her members to do any such thing. What applies to Scotland may well apply here too. Mike Nesbitt and Colum Eastwood were both on TV this morning,  making noises that suggest the Stormont Assembly also has a say. In fact, we were told that the Westminster parliament could vote on the referendum results and, if they defeated the motion, then bingo! The crisis wouldn’t have got off the ground.

Except that it’d look odd for the Mother Parliament  to dance to the tune played by a regional assembly, much less to fly in the face of public opinion in the form of the referendum result. That said, there may well be those  who voted BREXIT would welcome the chance to change their minds.

One thing is out in the open: Nicola Sturgeon seems intent on holding another Scottish independence referendum. Yeah, you say, and the Scots will bottle it again. They always do when it comes down to the wire. And you could be right. But consider this. A poll in the Sunday Post, which is a fairly conservative newspaper with a readership mainly of older people, has just reported that 59% of its readers would vote Yes in a second independence referendum. The Sunday Herald, which would have a younger readership profile, reports that 80% would vote Yes. And the Daily Record, which was opposed to Scottish independence last time out, has declared that were  a second referendum held, it would recommend a Yes to Scottish independence.

It’s no exaggeration to describe the BREXIT outcome as a political  bomb-shell. As Gerry Adams tweeted shortly after the results were announced: ‘Interesting times’.

At least annoy them…
IS EMER O’KELLY A FOOL OR A LIAR? by Donal Kennedy

15 Responses to Nicola Sturgeon: all set to spoil the BREXIT party?