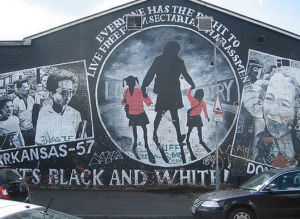 During the conflict, I saw plenty of kids dressed in military fatigues often parading with republican bands.  Their parents were republicans often in the IRA and they too would follow suit and go through the Fianna or the youth wing of the republican movement and into the IRA.

Today, the conflict has been over for some time yet there are some who find it hard to accept. Thankfully there are so few today who would turn out that they have to bus people in to make up the numbers.  There is most definitely no support in the area for such militant displays any more.

Was it shocking to see one kid among the display in Lurgan? Not to me, I have seen it before.  Was it wrong? I believe most definitely.  It is the exploitation of children and at best parental misguidance. But perhaps it is time we looked closer at other areas of parental misguidance that have contributed to intolerance and divisions in our society.

It probably isn’t fair to focus in on one group such as the Boys’ Brigade and has brought some heat on “poor deluded Jude” who had the courage to make the comparison to begin with, according to Eilish . I am certainly glad he did.  I had heard of the Boys’ Brigade and always associated it with Protestant marching bands but never really thought much about it.

After taking in some of what I have learned recently, I have to admit that the thought of grown adults instilling military-style discipline into kids within the BB, giving them pretend rifles and putting them through military style drills did actually shock me, if only for a few seconds,  until I realised it was northern unionism we are talking about where parental misguidance and bringing children into confrontation has been rife for decades.

On Wednesday 5 September 2001, as the parents and their children passed Glenbryn Parade, loyalists threw a blast bomb towards them. The device exploded, injuring two police officers and a police dog. Panic ensued. Children began screaming and “weeping uncontrollably” and one mother suffered a panic attack.

The Red Hand Defenders (RHD) said it was responsible for the attack and afterward, Progressive Unionist Party (PUP) politician Billy Hutchinson said he was “ashamed to be a loyalist today after seeing these people attack young Catholic girls”. However, he says he continued to stand with the protesters each morning to show leadership.

Such has been the leadership of unionism. If we are lucky enough to get condemnation of unionist actions, it will often be two faced or sweetened with a “but they did worse”. For example, during the Drumcree protests, the UVF petrol bombed the home of the Quinn family in Ballymoney, killing three children, all boys, aged 9, 10 and 11,

The M.P. for the area, Dr. Ian Paisley, visited the site of the attack and described the killings as “diabolical”, “repugnant” and it “stained Protestantism”. However, in an interview with ITN he stated that “The IRA have carried out worse murders than we had in Ballymoney over and over again”. It is these mixed messages from unionist leaders that lead to the continuation of mistrust and sectarian hatred of the Catholic community that has in the past allowed such abhorrent acts to take place and all too often with less response than that against Jude’s comments over the BB.

Today, the unionist community still consider annual bonfires and burning effigies and Irish flags as part of their culture. But is that culture, or is that simple bigotry stemming from parental and political misguidance?

It is perfectly acceptable for unionist leaders to come on TV and say their nationalist partners in government are a stench at which they hold their noses. If this is the example set by popular unionist elected representatives, what hope is there that the people who support them will provide any better guidance to their children?

Why is it, racism and hate crimes are magnified within unionist communities? Why are sectarian marches, bonfires and flag burning considered culture?

Whatever we feel about Martin McGuinness being too soft on unionism, his leadership is not an embarrassment to the nationalist community.  Can unionism say the same of their First Minister who campaigned on a sectarian plea to keep the position out of the hands of nationalism, at least for little while longer?

But if  someone dares to question the behaviour of unionist role models and organisations, they face a biased wrath of the media. Will unionism ever have to take a good hard look at itself?

View all posts by Jude Collins →
Michelle and Martin: a move each, while unionism watches
IS GUINNESS REALLY GOOD FOR YOU? by Liam Ó Murchadha