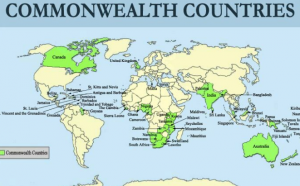 The Irish state formally left the British Commonwealth in 1949 with the establishment of the Republic of Ireland. At that time, this policy was seen as a natural further step in the direction of a fully sovereign Irish state, separate from Great Britain. Today, a full 67 years later, there are Irish figures of the political and journalistic elite, like newly appointed senator Frank Feighan (Is it now time for Ireland to consider rejoining the Commonwealth?, June 21st) calling for the restoration of the Commonwealth link. These voices and demands fall into two categories.

Firstly, there are those who sincerely, but somewhat foolishly think that British Commonwealth restoration could actually favour nationalist Ireland with regard to the North, and to possible future re-unification! The second category consist of the ‘usual suspects’; that small, unrepresentative, Anglo-centric neo-unionist minority, wishing to restore the ‘British Dimension’ to the 26 county state and appear to have influence out of all proportion to their actual size. This is the category I associate Mr Feighan with. But what would the Irish political landscape look like if we were to reverse the 1949 decision and rejoin? We need to examine this issue seriously as there are indications, quite apart from Senator Feighan’s propaganda piece, that attempts may be made on this issue over the coming years. It may be tempting to dismiss those who espouse Mr Feighan’s political views as cranks and malcontents, but this would be a mistake. These people slavishly peddle the most mendacious British propaganda and are in the process of attempting to deconstruct the Irish state and restore a British dimension.

One thing must always be kept in mind though, despite the machinations of Senator Feighan and others of the political elite, there is no significant degree of support amongst the population for British Commonwealth re-entry. Senator Feighan is big on assumptions and small on fact. He claims that there is widespread feeling that we should forge closer links with the UK – maybe even rejoin the Commonwealth, yet fails to produce any evidence of research or polls to support such a claim. I further suspect this is more a case of reincorporation into the UK than the Commonwealth. Rejoining the Commonwealth would be a backward and retrograde step. It would have the effect of gradually “re-Britishing” the Irish state and it would amount to a rejection of the separatist aspect of Irish nationalism. What would be the consequences if the Irish state were to rejoin the British Commonwealth?

The direct link between the Irish state and the British Crown, severed in 1949, would be restored. Because the British monarch is Head of the Commonwealth, this would mean that symbolically speaking, the monarch would occupy a higher position politically than that of our own democratically elected Head of State! We could find ourselves being embarrassed or even humiliated in the course of future royal visits, or state ceremonial occasions involving representatives of ‘Her Majesty.’

A ‘British Dimension’ would be restored to our political life. We would find ourselves being drawn ever closer politically to the United Kingdom. The long term aim of some British (and Irish!) establishment strategists, is the creation of a Federation of the British Isles which would include the 26 counties! Commonwealth re-entry, by restoring Britishness to the Irish state, makes that longer-term goal easier to accomplish. Commonwealth re-entry would create a climate favourable to the re-birth of Hiberno-Unionism, or Redmondism, as it is more commonly known. This ideology, which up to now has been the preserve of fools and fantasists, could once again become a significant minority political force, with connections to like-minded groupings in the UK. A potential fifth column. In terms of international affairs, we would once again become a White Commonwealth Dominion on a par with Canada, Australia and New Zealand. Much of Europe would interpret our move as a ‘return to the fold’ and a rejection of our former policies of separation from Great Britain.

Alongside the armies of Britain and the other three white Commonwealth dominions, the Irish Defence Forces too, will be expected to participate in Armistice Day ceremonies, and to ensure that personnel wear The Poppy. Don’t make the mistake of thinking that this cannot happen. Look at the concessions that have already been made to the Royal British Legion lobby since 1983. Remembrance Sunday is the most solemn day in the calendar of the white Commonwealth, a sort of Holy Day of Obligation. Even French Canada must show due respect. No allowances will be made for the Irish, who will in time be expected to participate fully and to conform!

Last, but by no means least; the re-Britishing of the 26 counties would once again bring about attitudes of subservience and servility amongst sections of our political and social elite. A return to the days of The Castle and the Viceregal Lodge as it were. Britain undoubtedly, would continue the practice of handing out ‘gongs’ to selected Irish Citizens in the form of Knighthoods and other titles of ‘nobility’. We would be shamed once again by the obsequious antics of those whom General Tom Barry once described as ‘sycophants and lickspittles’. Remember the disgusting spectacle of John Bruton grovelling before Prince Charles?

But what about the possible benefits that could come about from Commonwealth re-entry? This is where the advocates of British Commonwealth re-entry fall down. There are simply no discernible tangible benefits for nationalist Ireland. For instance; there will be no big transfer of funds to Ireland, unlike the position regarding our membership since 1973 of the European Union. There are no new trade, cultural or diplomatic opportunities to be had. In any case, our trade policies are determined by reference to our membership of the EU, and moreover much of the Commonwealth is terribly poor.

The restoration of ties to the British Commonwealth will not make the positive contribution towards the situation in the North that its advocates would claim. Indeed, it could make matters worse by emboldening reactionary unionism and sowing demoralisation amongst nationalists. It is quite likely that in the next few years a ‘package deal’ maybe cobbled together by the two governments. Some sort of re-unification of the island, in return for re-entry into the Commonwealth, together with other re-Britishing measures. This should be firmly rejected.

It is clear that there is nothing here for nationalist Ireland. Trading our sovereignty and independence to be permitted to compete in the Commonwealth Games have even been suggested.  Those who advocate British Commonwealth re-entry, should be made to spell-out what they see are the specific benefits. They should not be allowed to get away with making broad general claims. A special watch needs to be kept upon our government to ensure that it does not make undue concessions in this matter, to Britain or to the Unionists. We as a nation cannot afford another defeat similar to the one inflicted upon us over the issues of Articles Two & Three of the Constitution.

Furthermore, attempts have been made to bring about direct elections to the Irish-British Council, the body set up under the Belfast Agreement. This demand for direct elections is astonishing, even insolent, for it challenges the very existence of the Irish state as a political entity separate from Britain. This is a demand for a parliamentary assembly for the whole of the “British Isles” which would also incorporate the Irish State. A new Act of Union under the guise of federalism that could challenge the authority of Dáil Éireann. It is perhaps worth noting that two former Irish representatives on the British-Irish Council, former Fianna Fáil government Minister Michael O’Kennedy, and former Fine Gael TD and Senator Paddy Harte have both been awarded honourary titles by Queen Elizabeth II in recognition of their services as members of that Inter-Parliamentary Body. It is also noteworthy that Senator Feighan is a former chair of the British-Irish Parliamentary Assembly.  During the last Dáil term Mr Feighan, in his capacity as a TD, wore a poppy inside the Dáil as a ‘symbolic gesture of inclusiveness’ and to remember the Irish in British uniform who fell in the Great War. However, Mr Feighan’s ‘symbolic gesture of inclusiveness’ did not stretch to him wearing an Easter Lily in the Dáil which honours those Irish in Irish uniform who gave their lives fighting for this small nation’s freedom from colonial rule.

View all posts by Jude Collins →
A LETTER TO THE EDITOR: HOW TO STALL by Michael J Cummings
BREXIT and us: Is Britain ‘waiving the rules’ ?