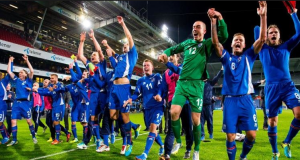 Is there a link between politics and sport? Ask a silly question. The NI soccer team singing their national anthem gives you an answer to that one. If that’s not enough, think Belfast Celtic, think Linfield, think a Night in November.

But this morning I’m not actually thinking of the local link. I’m thinking of the state of chassis that Britain is now in. The stock market is arrowing towards the basement, the Tory party is riven in every direction as the political corpses are shoved aside and the challengers to replace Cameron square up to each other (behind closed doors, of course). Meanwhile the main opposition, the Labour Party, has lost all credibility in Scotland, is confronted with the resignation of the shadow Cabinet, outside Westminster there’s a crowd of a thousand or two chanting and holding posters demanding “Out with the Red Tories”, while inside Westminster Labour MPs are telling each other and anyone who’ll listen that Corbyn. Must. Go. To which Corbyn is replying No. Chance. Nobody has a clue how to clear up the rubble left by the Brexit bomb, never mind construct an alternative.

And sport? Last night the England soccer team served up a perfect sporting parallel. Faced with a team drawn from a population of some 300,000, a team that had never been to a major championship before, from a country where the elements are so hostile, they can only play during the summer months – faced with this micro-David, the England Goliath went down to a 2-1 defeat, the biggest humiliation since 1950 when the USA beat them, and even that paled before last night’s delivery of a Going Home ticket. Does anyone know how to fix this broken team? I’ve just listened to Chris Waddle on BBC Radio Four suggest Glen Hoddle, who was England manager in the 1990s, until he unwisely suggested that people in wheelchairs were there because they’d done something bad in a previous existence. So we’ll take that for a No, then.

35 Responses to Sport and politics don’t mix? Ask them in Iceland