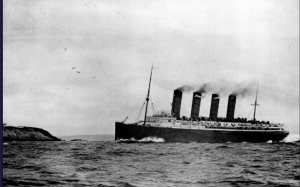 The sinking of the Lusitania off the Old Head Of Kinsale  in 1915 was seized on by the British Government  to recruit men from other nations in her war on Germany.The liner was no mere commercial enterprise in an era when British governments, slaves to liberal. laissez faire economic doctrines, let businesses sink or swim by their own efforts.Her construction was massively subsidised by the Admiralty, as Britain planned to crush Germany and conspired with France and Russia with that object.

The German Consulate in New York placed notices in the newspapers there warning those thinking of sailing on the vessel that it might be sunk if the German Navy got the opportunity to sink her.British Naval Intelligence at the time was superb and German radio signals were being intercepted and decoded smartly. The Lusitania was a very fast ship, much, much faster than any German submarine.The suspicion has arisen that she was deliberately offered to the German submarine for the great prize of getting America
into the war.
Ireland was plastered with posters urging Irishmen to avenge the Lusitania and join the British Forces. Presumably a great many could not ignore that demand on their chivalry. Britain’s propaganda in the United Stares went into overdrive. But the United States didn’t go to war with Germany for nearly two years after the Lusitania’s sinking and when her leading capitalists reckoned it was in their interest. But it seems to me that American and British films uniformly attribute Uncle Sam’s crossing the Atlantic to starry-eyed, hot-blooded Gallantry rather than hard-nosed  and cold calculation. It has long been claimed that when she was torpedoed the Lusitania was carrying munitions. She lies
in Irish waters and competent salvage companies have shown an interest.
It seems that the Irish Government does not want it touched and would prefer to let lying dogs sleep.

One Response to THE LUSITANIA FACTS AND SPECULATIONS by Donal Kennedy