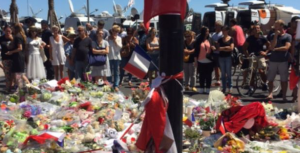 Call it the Christy Brown syndrome. Christy Brown, you’ll remember, was a man who was brought up in extreme Dublin poverty with a crippling handicap. Communication with others was virtually impossible until he learned to write with his left foot. And yes, he then wrote a book, later turned into a successful film, called My Left Foot.

Brown was a man of immense courage and some talent. But there is always a reluctance on the part of critics to say anything negative about the quality of such writing in case it seems in some way heartless. Even though everyone knows it’s possible to be extremely brave and at the same time a hopeless writer (which Brown wasn’t, incidentally), those judging the writing invariably tend to soft-pedal because of the physical disadvantage in the background.All that as preamble to the events in Nice last week. The slaughter inflicted by one man with a truck was sickening. Men, women, children, all scythed to death. The cruelty of the event makes it difficult to take in.

It also makes it difficult to talk about why it happened. There’ve been endless reports on television and the press about the brutality of Nice. Few commentators dared ask the question “Why did this happen?” Those that did tended to come up with an answer along the lines of “Because they hate us”.

Other commentators – and sometimes the same ones ) talk about the determination of ISIS/Daish to establish a world-wide Caliphate. The aim of these people, we’re told, is to forcibly convert the rest of the world to fundamentalist Islam.

I believe such talk is rubbish. Not because some of those involved in violent Islam wouldn’t welcome such world domination, but because they’ve no chance of achieving it. The Charlie Hebdo killings, the carnage at Nice and various other acts of terrorism come from people who have decided, regardless of the odds, to push a back against Western domination in their countries.

Think about it. If you were a citizen of Iraq, would you welcome what the Western powers have done to your country? It’s likely that not many people loved Sadaam Hussein; but they might have felt he was their dictator and regime change should have been a matter for them, not the West.

Similarly with Muammar Gaddafi – the West decided he was an undesirable leader in that country and they hunted him down and brought chaos in the aftermath. Syria has been reduced to a country consisting of ruined buildings, terrified people and widespread conflict. All courtesy of Western intervention.

If you were a native of one of these countries, you might keep your head down and pray for safety. Or – and there are always people like this – you might decide that the only way to be rid of the foreign occupier was to make it too expensive for him to remain. We may say many things about the slaughter in Nice or Paris or London, but the one thing we can’t say is that they were ignored. Which was precisely the intention of those who inflicted it.

There are many voices raised in the wake of such tragedies. Unfortunately the loudest voices are often those suggesting a security response Virtually none of the media has traced the roots of the violence to the greed of Western meddling.

Reliable figures for the number of Western deaths in the Middle East are hard to come by. But you may be sure it comes nowhere matching the violent deaths of innocent people in that region. During 2014, in Syria, Iraq and the Yemen, some 100,000 people were killed. As the WWI poet Wilfred Owen put it: “What passing bells for those who die as cattle”?

View all posts by Jude Collins →
‘Post-Brexit Britain: The fall and rise of European Solidarity’ by Donal Lavery
‘When is a Unionist not a Unionist?’ by Jessica McGrann

12 Responses to Nice killings: why?