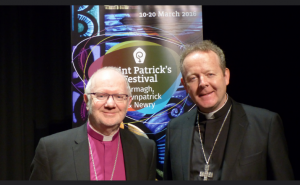 THE IRISH TIMES has a regular feature headed “Rite and Reason” which, at its best is trite, but generally merits the description “Tripe and Treason”. For instance, it parades Seamus Murphy SJ and other corner-boys, to sneer at Connolly and Pearse and to bear false witness to the innocence of Daniel O’Connell, who shot one man dead in a duel in Dublin in 1815, and was stopped from meeting another man for a duel on the Continent some years later.

The Catholic and Church of Ireland Archbishops of Armagh, Eamon Martin and Richard Clarke, have jointly visited the Somme killing fields.They found food for thought. I beat them to it, for I was there 30 years ago and published my thoughts at the time and a few times since. See BLOG “Sermons in Stones.”
The Archbishops spoke together about Tom Kettle. I met Tom’s brother Charles. I also wrote about Tom Kettle. See BLOG “A Household Name in Ireland.” I wonder did either Archbishop  ever read Robert Lynd’s tribute to Kettle, or Kettle’s poem “Reason in Rhyme.”
The heroism and personal sacrifice of German Jews who fought for the Kaiser and Moslems “Mort Pour La Framce” are mentioned in “Sermons in Stones”; and in the review I wrote 28 years ago of Philip Orr’s “The Road to The Somme”  I wrote of the heroism of the 36th Division- see BLOG “Carson’s Kiss of Death”.
The BIG LIE that such sacrifices were airbrushed from Nationalist and Republican narratives has been a cash cow for ladies and gentlemen of the  media and meritless  professors of History for too long.
It’s a pity that the Archbishops didn’t address the fact, acknowledged by THE DAILY TELEGRAPH, that tens of thousands of men joined the British Forces believing that the execution by the Germans of Edith Cavell in 1915 was in contravention of the internationally accepted rules of war. For a hundred years the British denied the woman was a spy. Dame Stella Rimington, ex-Director of MI5 has confirmed the Germans were right about her. She was a spy. I’ve no doubt she was a brave woman. I understand she is numbered in the Church of England’s Calendar of Saints. I don’t know is there a Patron Saint of Spies.
The Archbishops pray that we remember the solidarity and trust of Protestants and Catholics in the trenches. It would be no harm to remember how the idealism, generosity, and chivalry of  whole generations of young men have been, and continue to be, exploited by liars to put them at each others throats.

View all posts by Jude Collins →
BREXIT: who will feel the pain?
Chilcot speaks out: MPs tremble

2 Responses to ARCHBISHOPS UNITE IN TRITE APPEAL by Donal Kennedy