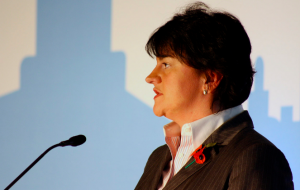 While not wanting to impose on you physical details you might prefer to avoid, my buttocks clenched in embarrassment last evening as I watched the news. Arlene Foster was busy doing her version of the Iron Lady and making it clear to “Enda” (I put quotation marks around it, Virginia, because that’s what Arlene called him) that since she hadn’t been consulted about his idea of an all-Ireland forum to respond to the BREXIT bomb-shell, she and her party wouldn’t be having anything to do with it. Martin McGuinness promptly said he considered it a very good idea and one to which the business world, north and south, would be happy to respond. What’s more, there should be no question of anyone exercising a veto on such a forum.(Translation: you stay away if you want to, Arlene; the rest of us would like to press on and address the problem.)

And the buttock-clenching bit? When the camera showed Enda saying his bit. Face shiny and tip of nose red with embarrassment, he repeated his belief in such a forum but conceded that of course it wouldn’t work if there wasn’t participation by all involved. (Translation: I thought I had a bright idea but if you say it’s rubbish, Arlene, you’re probably right.) No wonder Enda’s popularity in the south has tanked.

It all boils down to one thing: Arlene figures we’re part of the UK, and since the UK gave a thumbs-down to the EU, so did we. She’s wrong. Thatcher may have thought we were as British as Finchley, Arlene may figure we’re as British as Birmingham, but we’re not.

In the UK, we are of course a minority. But that doesn’t mean the majority of BREXITeers can act as they wish because they’re the majority. This state had a similar problem – a sizeable minority in this case – and it responded with fifty years of discrimination and gerrymander, followed inevitably by thirty years of armed conflict. Unionists learned the hard way that you have to have the consent of those governed, even if they are a minority. Our answer to the eighty-year cock-up was the Good Friday Agreement, which may look odd to outsiders but it’s the best we can come up with pro tem.

If Arlene and the BREXITeers keep on mouthing “We’re in the majority, so suck it up, Remainers!” she is sowing the seeds of rage and discord in the coming years.

One other thing we’ve learnt during the past week: don’t look to the southern government for leadership. Enda Kenny’s default response is to genuflect in the face of unionism, just as John Bruton’s default is to genuflect when faced with royalty.

View all posts by Jude Collins →
‘Justice: now you see it, now you don’t’ by Tom Cooper
”Brexit has unleashed a ‘Titanic’ battle” by Declan Kearney

32 Responses to Arlene offers a lesson: how not to deal with minorities