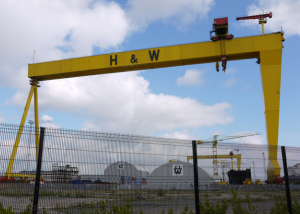 Brexit has once more brought into sharp focus the fault line of partition at the heart of Irish politics.

WHEN I left the EU referendum media centre at Titanic in Belfast, last Friday morning at 5:45am, dawn had broken. I looked up and realised the giant Harland & Wolff shipyard cranes were right above me. That skyline image was once synonymous with the presumed unassailability of the Northern state’s dominance – a thought I pondered for a moment.

The results of the EU referendum were finally confirmed.

Switching on the car radio, the news was awash with the immediate fall-out: stunned disbelief amongst many commentators as well as campaigners on both sides, chaos in the world markets, and a crash in the value of sterling. Overnight, in the space of a few hours, the British state had been plunged into political and economic crisis.

The majority of voters in the Six Counties – from across the political spectrum – decided the North should remain in the EU. All my canvassing and discussions with wider civic society during this referendum campaign had suggested to me that was a likely outcome.

In reality, this referendum was always about a civil war between British Conservative right-wing factions. It is unacceptable that the democratic will of this region should be overruled and subverted by English voters.

The economic and financial future for citizens in the North and the entire Border region has become one of unimagined uncertainty.

200,000 jobs in Ireland depend upon €1.2billion of trade between North and South each week.

Brexit directly threatens all that – and more.

I have previously challenged British Tory Secretary of State Theresa Villiers to say whether Brexit would benefit our people, and if her government would replace lost investment, trade and funding. She refused to answer then, and since.

However, the majority of our people knew the answers to those questions. They spoke clearly last Thursday week and their current outrage is justified.

Theresa Villiers should follow David Cameron and resign. She has absolutely no authority to represent the economic or social interests of people in the North or on any matter relating to our relationship with the EU.

Brexit is the price of Ireland’s continued partition.

The North will now face an even more right-wing British Tory government and greater levels of austerity.

There is only one tenable position for the regional Assembly and Executive – they must respect and underpin the democratic decision of the North.

The urgent focus of the regional political institutions and Irish Government must be to secure the North’s special relationship with the EU and protect the trade, investment and funding that are essential to support our regional and island economies.

The local Executive’s budget, Programme for Government (PFG), and democratic will of our people must not be held hostage to the anti-democratic agenda of British right-wing Tories.

Significantly, British Tory Chancellor of Exchequer George Osborne has since forecast serious consequences for public spending and services because of the Brexit decision.

The British state as we know it is now gripped in an unparalleled crisis with far-reaching constitutional and political repercussions. But the political imperative now for our regional government must be to stand up for local democracy, and against austerity.

The new Assembly has a responsibility to take forward an agenda of transformational change. That must not be undermined as a result of Brexit’s political and economic aftershocks.

The PFG offers a new policy paradigm that puts the well-being of community at the heart of decision making.

The proposed consultation process should be embraced as a strategic opportunity by local businesses, trade unions, our rural and urban-based community sectors, and wider civic society to further democratise government in the North.

The Executive should listen very carefully to that feedback.

There is a need for a step-change. Brexit must not be allowed to distract from that.

Renewed commitment to power-sharing and partnership must be central to the new mandate.

That will be as much a test for those parties that have chosen ‘Opposition’ as for those entrusted with governmental responsibility.

It is crucial the approach governing this forthcoming Programme for Government is radical, innovative and transformational.

The political institutions and PFG must refuse to be fettered by institutional orthodoxy and must resolutely oppose austerity.

It is essential that Northern political institutions act as a bulwark against British Tory austerity.

Justice and policing remain central to the continued democratic transformation of the Six Counties.

Earlier this week, as Sinn Féin’s spokesperson on Justice, I told the Assembly I would be seeking increased investment in frontline policing, community restorative justice programmes, and effective service delivery to make our community a safer place.

Justice agencies and processes must be appropriately resourced to ensure they administer not only appropriate punishment but also deterrence and rehabilitation.

The justice system must be responsive to young people, vulnerable women, disadvantaged families and our elderly citizens.

That includes those families who are denied truth and justice because of the British Government’s refusal to finance legacy investigations and inquests.

There must also be greater accountability regarding the use of public funding.

As a member of the Assembly’s new Public Accounts Committee, I also placed on record a clear absence of transparency and accountability, and a culture of disregard concerning the use of public funds.

That is never acceptable but more especially when our Executive’s budget is being raided by the Tories and too many families are living in hardship.

I and Sinn Féin will be prioritising a zero-tolerance policy towards the misuse and abuse of public funds in the coming five-year mandate.

We will be standing up for what is right, for sustainable public services, and against austerity, gombeenism and ‘strokes’.

Brexit has once more brought into sharp focus the fault line of partition at the heart of Irish politics.

The Brexit result has just unleashed a ‘Titanic’ battle in the defence of local democracy and Irish national interests.

‘A luta continua’ – the struggle continues.

View all posts by Jude Collins →
Arlene offers a lesson: how not to deal with minorities
IRONIES by Donal Kennedy