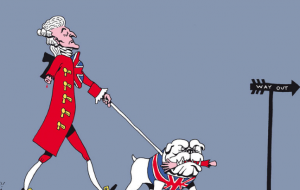 Would the UK leaving the EU be good for the south of Ireland?

It depends on who you ask. Some experts will say that of course it will: foreign direct investment will be attracted to the south because it will then be the only English-speaking EU state, with Britain’s departure. The south of Ireland would welcome  those big international companies and they would welcome a toe-hold in the EU. The south also has corporation tax at 12.5%,  seen as such a crucial advantage that some southern politicians believe Ireland should leave the EU before allowing the 12.5% to be altered by Brussels or anyone else.

On the other hand, the UK leaving  the EU presents the south with a massive problem: how to maintain and develop the huge amount of Every day some 30,000 people cross our invisible border, many involved in cross-border business. In addition to the damage done to trade, BREXIT may well create an immigrant problem for the south and the north. People fleeing war and poverty have gathered in their thousands at Calais, desperate to make it to Britain; won’t it be logical that in the event of BREXIT occurring, thousands would congregate along the border between south and north? The rabbit-warren of routes across our border is much more susceptible to penetration by immigrants than the English Channel.

Mixed in with these contradictory analyses is the politics of it all. Irish nationalists and republicans see the current opposition in the north to BREXIT as an opportunity for unionists to consider again the argument for national reunification. On the other hand DUP head honchos like Sammy Wilson and party leader Arlene Foster are emphatic that the BREXIT vote underlines how we are part of Britain and the emergence of increased British nationalism will cement that union. Remember, Sammy has for decades been saying there’s not a drop of Irish blood in his body.

So who’s right? The truth is we don’t know. Nobody knows. A great number of people in the UK – I would say a majority, now that the British people are beginning   to see the effect that even planning a BREXIT is having on the market – most of those in the UK, not just in Scotland and the north of Ireland, regret the vote that looks set to take the UK out of the EU. Perhaps their fears will be ill-founded. Perhaps the massive savings from not having to pump £350 million a week ( or was it just a random sum written on the side of a bus by Boris?) – perhaps that’ll lead to a flourishing of trade in Britain while the EU slowly disintegrates and the south comes knocking, begging to be allowed back into the British club.

Maybe. And maybe Nelson McCausland will be a key member of the British gymnastics team in Rio this summer.

22 Responses to BREXIT: who will feel the pain?