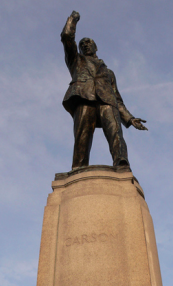 CARSON’S KISS OF DEATH The Road To The Somme – Men of the Ulster Division Tell Their Story. Philip Orr. Blackstaff Press, Belfast. 248ppp/b. £9.95.

Of all the units of all the armies that fought in the First World War, the British Army’s Ulster Division was surely the most curious. Most of it was transferred en bloc from the Ulster Volunteer Force, a private, wholly Protestant army, raised in 1912 to fight the British on the enactment by Westminster of the Irish Home Rule Bill. Its rhetoric had included inviting Kaiser Wilhelm to copy William of Orange and tochase George V over the Boyne. Within four years it was to sacrifice itself to the Kaiser’s massed machine guns on the Somme, in an attempt to drive the Germans from Republican (and Catholic) France.

The oral and written reminiscences of veterans are used extensively throughoutthis book, but it owes more to Philip Orr than its sub-title implies. His interest stems from curiosity about a portrait of a great-uncle killed in the Division. Well researched and written, humane, honest and fair, the book’s coffee-table format should not put off the “serious” student who might expect a public relations exercise for Unionism or a “gung-ho” approach to slaughter. “The reader cannot but be impressed by the endurance and quiet heroism of deluded youths led to the Hell of the Somme.”

The book has no villains, not even the vainglorious old fools who led them there, but it is an indictment of militarism and war itself.

For me the early chapters have the period charm of an episode from “Upstairs Downstairs”, the TV serial of a few years back. All those titled and landed gentlemen, training their retainers on their estates. For the “poor man at the gate” the uniform, arms carrying and drilling gave him an importance unattainable in his civilian roles and motor charabanc jaunts in the Mournes may have been an intimation of Heaven, where the class system could be expected to remain unchanged and Papists likewise excluded.

Before the first Ulster Volunteer was recruited a meeting of magnates in London had underwritten the force to the tune of two hundred and fifty thousand pounds — more than the total income tax paid in Belfast that year. The effect of such money might be gauged by the UVF’s deployment of 827 motor vehicles for theLarne gun-running in April 1914 — against the 500 which accompanied the British Expeditionary Force to France the following August. For the gentry to whom such new-fangled transport lacked charm there was the Enniskillen Horse, a UVF unit pictured booted and saddled, as if ready to hunt foxes — or priests.

Mr Orr makes the point that the UVFs Irish campaign was “a game of bluff with a perplexed but benign British Government.” He continues:

“The massive military marches and open-air rallies of the Volunteers had been what Orange demonstrations and marches have always been — a form of psychological offensive, designed to scare the enemy with the rattle of sabres and the boom of big drums.”

“On the Somme they were to engage with troops no less used to big parades – the Kaiser would watch some 50,000 at a time drill at Berlin’s Templehof base, and a million rounds of British artillery rained on German positions, with little more damage than a Lambeg drum-roll on a gathering of Fenians.”

Britain’s Somme offensive of July 1916 was planned to take pressure off the French Army, which since the previous March had been resisting the Germans at Verdun. It was believed that the German positions would be smashed by a week-long artillery barrage,•lid that the British infantry could simply walk up to positions after the barrage, overcome the surviving Gernans and punch through the German lines and break the stalemate which had existed for nearly two years. In the event, although at times the detonation of huge shells could be heard in London, the Germans had dug-in very deeply and sat out the barrage in relative safety.

In the time it took the British to reach the German trenches, the Germans sprintedback to ground level and mowed the advancing British down like grass. Alone of the British forces, the Ulster Division had left their own front line just before the barrage lifted, and sprinted to the German lines. Thus alone of the attacking forces they captured the positions allotted them, but the failure of the forces on their flanks left them exposed to the full might of German firepower when those had been dealt with. They had to abandon their gains.

In the first morning of the Somme, July 1 1916, the British suffered over 50,000 casualties, some 16,000 fatal, and they were to suffer some ten times that by the time the battle was over many months later. As “Kitchener’s Army” was largely made up of units recruited from particular factories, schools and streets, the destruction of any unit could leave a whole street, or a town bereaved.

Carson’s Ulster Division was similarly closely knit with similar local effect. In all some 50,000 men recruited in Ireland died in the First World War, the majority of them Catholic and Nationalist, as were most of the units raised from Irish communities in Britain, for instance the Tyneside Irish, decimated that first day of the Somme.

Of the Ulster Division’s Somme sacrifice Mr Orr remarks that it never achieved anything, and I myself have seen graves of men of the Division killed that 1st July interspersed with those of Dublin Fusiliers killed on the same spot in November.

One veteran tells of a comrade he’ll never forget — “He made himself a special weapon for fighting in the trenches. It was about half the length of a pick shaft and on one end he screwed a pearshaped lump of cast iron, on the other was a leather thong which he kept tied around his waist. He used to parry a bayonet thrust with a rifle and then swing this lump of cast iron upwards. No matter where it hit the man it broke bones. He’d smash a man’s wrist or hand, then when the rifle flew from the man’s hands he’d shoot him. He fought like the devil. He must have killed a dozen Germans. I don’t know how long we were in the ‘D’ line but while there we fought every second, there was no rest at all. The blood had got about the tongue of our boots and our socks were soaked with it.”

One veteran, George MacBride from the Shankill, returned from the war to find Belfast “a town filled with pawnshops, pubs, politicians and preachers.” He joined the Labour Party, where he met Elizabeth Carney, who as James Connolly’s Secretary, took part in the Easter Rising, and married her. Young Billy McFadean, also from the Shankill, saved the lives of his comrades by falling on a grenade. His bereaved father went to collect his Victoria Cross from the King at Buckingham Palace, “having been granted a third-class return ticket from Cregagh to London.”

4 Responses to CARSON’S KISS OF DEATH by Donal Kennedy