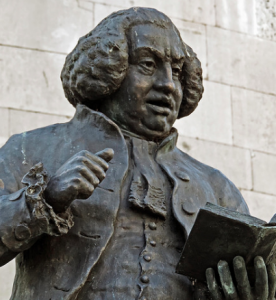 At school during the 1950s, those preparing for the Intermediate Cert, and the Leaving Cert. had anthologies of English Poetry and English Prose. I suppose they were old-fashioned. but none the worse for that.

Samuel Johnson’s Letter to Lord Chesterfield was a wonderful put-down. Chesterfield had published a fulsome appreciation of Johnson’s Dictionary and Johnson recalled seeking the Lord’s patronage, in vain, when he first started his project. The 18th century was an era of deference and Johnson was skint. Johnson compared him to a fellow watching a man drowning who encumbered him with help if he managed to reach the river’s bank by his own efforts.

Chesterfield published Letters to His Son, of such cynical amorality, that Wolfe Tone, reading them many years later, exclaimed that had he met the lord, he would have taken a horsewhip to him. There were some people in those days for whom honour was important.

But I’m not persuaded that Philip Dormer (1694-1773) 4th Earl of Chesterfield, was all bad. He was Lord Lieutenant of Ireland (1745-1746) and reputedly of a tolerant and liberal disposition. He presented the City of Dublin with the Phoenix Park, whose 1750 green acres prompted the California-born son of a Cork republican who returned to Ireland in 1932 after a ten year absence for the good of his health to say -“Gee, Dad, who waters it all?”

I’ve been reading today (July 1) a report in the IRISH TIMES that in the South (meaning no doubt all the South, all the West and   most of the East of Ireland) that those Irishmen who served with the British forces in the First World War, were forgotten, ignored and marginalised. The writer was Fergal Keane. I have heard Keane on radio, seen him on television and read him in print for a few decades. I have some good words to say about his reportage and none of them are complimentary. Irish Nationalists and Republicans did and do remember those “forgotten” men . And in Dublin the local branch of the British Union of Fascists marched in amicable fraternity with the British Legion.

Like Lord Chesterfield, Fergal Keane may be remembered for his Letter to His Son. I  won’t be writing to the young man, but if I was I would address him in the words at the top of this BLOG.

View all posts by Jude Collins →
‘Tom Kettle – isn’t he a household name in Ireland?’ by Donal Kennedy
Referendum petition