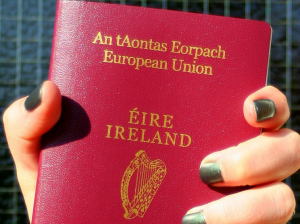 How significant has been the surge in application, post-BREXIT, for Irish passports? It’s difficult to get exact figures but there’s general agreement that application centres have run out of application forms and that people who would never have thought of applying for an Irish passport are now doing just that. And it’s not just for themselves, but for their children as well, since it is they who will have to cope with the consequences of the Tory Party in-fighting that spilled over into life-changing prospects for Ireland, Britain and maybe Europe.

Over 16 million people in the UK voted to remain in the EU, so we may conclude that it’s from that disappointed ocean of people  the applications are coming. Why do they want to have an Irish passport?

Because it gives them a toehold in the EU. I’m not clear whether it restores their full rights in terms of EU citizenship, but at an emotional level at least it lets them feel that they are still part of the wider unit we call Europe. Here in the north of Ireland we don’t give much of a damn how people feel about Europe; what we really care about is how they feel about being Irish. Will obtaining an Irish passport make people more Irish?

I don’t think so. I know of a number of unionists who, long before the BREXIT debate, carried an Irish passport because there were parts of the world where a British passport could be a risky document to carry, while an Irish passport generated none of the same hostility. As an Irish person, I felt pleased and flattered by that. Most countries, like most people, like to think they’re popular.

Did the acquisition of an Irish passport make my unionist acquaintances more Irish? Umm…It’s complicated. I think that it very likely gave them a tiny reminder that they live in Ireland and that they are part of the wider Irish family. So to that extent, having an Irish passport nudged them a couple of inches towards joining those of us who see ourselves as Irish in an unqualified way. The hope that most Irish people have, that unionists will recognize how welcome they are to become an active part of the Irish nation – that hope is given a small boost by the flood of applications for  Irish passports.

But. And it’s a significant but. I don’t believe any of my pre-BREXIT unionists who acquired Irish passports stopped thinking of themselves as British or stopped voting for unionist parties. That change would be a far more profound step. Holding an Irish passport does something in terms of identifying with Ireland but it doesn’t make you see yourself as un-British.

I say that as someone with children (well, ex-children) who hold Canadian passports, since that’s where they were born. Do they think of themselves as Canadian? Nope. So let’s not get too excited. Unionists with Irish passports is pleasing, but it’s far from fatal to self-identification as British.

View all posts by Jude Collins →
SENSE OF HUMOR by Donal Kennedy
‘ THE ROAD TO INDEPENDENCE: Howth,Sutton and Baldoyle play their part. by Philip O’Connor. 1916 Commemoration Committee Howth Sutton Baldoyle’ by Donal Kennedy

41 Responses to Getting an Irish passport: a question of identity?