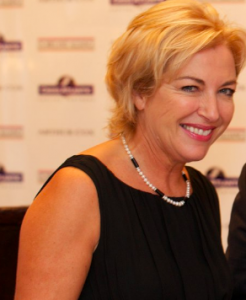 Liz O’Donnell, who you may (or may not) remember was a Progressive Democrat TD, has been gasping. Her reason for this shortness of breath? Enda Kenny.

“What makes me gasp is the timing of the Taoiseach’s musings about a border poll on Irish unity as part of the Brexit discussions”.

There are other things Liz could have gasped about. She might have suffered shortage of breath at the news that a poster honouring the loyalist killer Billy Wright was put up in Dungannon. The picture of the loyalist refers to him as a ‘Brigadier’ and quotes him as saying ‘Looking back, I would say Cappagh was our best’. This refers to the shooting dead of four unarmed men, three of them IRA men, in a bar in Co Tyrone. When the PSNI were approached to take it down, they said they would not. “There is no doubt that the sign will be perceived by some to be offensive, but not by others”. Which is a bit like saying that throwing a cat out a high-rise window is offensive to some but not to others.

You might think Liz, as a former member of a former party which was big into law and order – former party leader Michael McDowell as Minister for Justice talked a very good talk about cracking down on drug crime – you’d think Liz’s eye would be drawn to such a blatant example of hate crime. And there are plenty of other examples – Sammy Wilson on breast-feeding, Danny Kinahan on flags atop bonfires – yet none of them catch Liz’s attention or shortens her supply of oxygen. She is breathless at the Taoiseach so much as mentioning a border poll. Why? Because it might upset unionists.

So we have the spectacle of a former PD TD and Minister gasping at the very thought that the Taoiseach might refer to a key item from the Good Friday Agreement, but the same former TD and Minister having nothing to say about loyalist posters exulting in the killing of unarmed men or the ritual burning of the Irish national flag on Eleventh Night bonfires. Or Sammy’s view that breast-feeding in the House of Commons links to voyeurism and exhibitionism. But then such matters wouldn’t offend unionist politicians, only the nationalist/republican population north and south, and maybe the women and men who don’t see breast-feeding the way Sammy does, so that’s OK.

Good to know, Liz,  that although time has booted you out of the Dail and destroyed your political party, it  hasn’t blunted your keen moral judgement.

View all posts by Jude Collins →
Danny Kinahan (Ulster Unionist MP) – just  a bit of a Twit or something more sinister? by Sammy McNally
‘Jeremy Corbyn: The People’s own MP’ by Donal Lavery