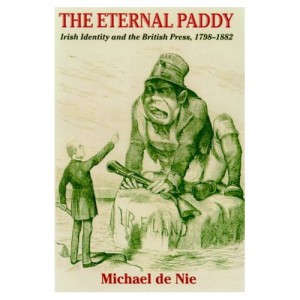 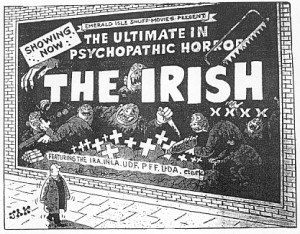 The Irish were described during Julius Caesar’s time as a cannibal race who devoured their foes and lived in a land of perpetual Winter. They called that land “Hibernia” . Looking out the window at the bleakest July of sodden rain, I can see the writer’s point, but it is a neat vision like something cobbled together for an episode of “Game Of Thrones” and I suppose , if you lived in the balmy warmth of Rome and had governance over the known empirical world , you’d mayhaps had never have to set foot in the place anyway , already “owning” it in your own mind, in any case.Why bother? If you owned and had defeated everybody and everything else , there’d be no real need to actually go to the very ends of the earth, as it was then, and take a look at this mythical “Hibernia”, so it might hold, within it , some mystery and possibly a modicum of delusion..
The Irish slavers who kidnapped the Welshman who later became Ireland’s patron saint ,Patrick , didn’t realise what they were letting loose either, I suppose .The Patrick who later became both myth and symbol. That’s how stories and legends are made.
I was reading the musician Elvis Costello’s (AKA Declan Mc Manus ) recently published fine memoir “Unfaithful Music and Disappearing Ink” . He has always written well and his song-craft is now legendary , leading to him teaming with such musos as Burt Bacharach , Paul McCartney, Allen Toussaint , the Pogues , the Specials , Diana Krall, the Brodsky Quartet and many others, but I was specifically drawn to his exhumation of his own family ‘s roots and that rich Irish, London and Liverpool connection .He writes without sentimentality or schmaltz , easily cutting to the core of the bitter apple.
As something of a scene -setter to sketch some idea as to how some of his antecedents had lived and had been viewed, he wrote ,” English cartoons routinely portrayed the Irish with the features of pigs and monkeys while the Times of London wrote of them with almost genocidal glee….” :
“They are going .They are going with a vengeance.Soon a Celt will be as rare in Ireland as a Red Indian on the streets of Manhatten…
Law has ridden through.It has been taught with bayonets and interpreted with ruin.
Townships levelled to the ground, struggling columns of exiles , workhouses multiplied and still crowded, express the determination of the Legislature to rescue Ireland from its slovenly old barbarism, and to plant there the institutions of this more civilised land.”
When Elvis Costello’s parents were first wed in 1952 , the same year I was born, the McManus family name was something of a problem when it came to finding a home in London . His mother wasn’t Irish at all . She hadn’t a drop of the tainted blood inside her but his father,Ross a singer with the Joe Loss Orchestra , had the second or third generation curse of Hibernia in his veins although he was English -born, so it was she who braved the notices on the doors and windows …”No Dogs, No Irish ,No Blacks” . There gradually came a few more showbizzy “Irish” such as the Beatles, Val Doonican , Eamon Andrews , George Best to chip away at the stereotypes (or maybe not ,in George’s case)but the “Irish” jokes and the notion of the thick Paddy prevailed as a substitute for outright racial slur until this very day.
That’s how the Irish were viewed by the latest in world empires right up into the 1960’s and 1970’s. Isn’t this exactly how mythology grows?Isn’t this how racism is first instilled and circulated ?These notions were teeming through my mind in the aftermath of the EU Referendum and the use of fear and the exposure of racism at the heart of the debate ,but also the Chilcot revelations exposing Tony Blair’s evangelic stampede into the Iraq War coalition of terror, on the coat-tails of George Bush’s American adventure. The resulting deaths and chaos are their own testimony but thankfully life does not soley exist to provide an ongoing horrorfest of political knavery to be dissected by pundits.
……………………………………………………………………………………………………..
There are other more prosaic concerns to be dealt with….

I’ve just grown and literally bottled a fond memory of my late Grandad Joe of Blackwatertown and my late Uncle John of the old Lock House, there.Yesterday when the sun shone gloriously and briefly, I happened to ruffle the leaves of one of my currant bushes in the back garden, filling the air with that remembrance of unforgettable, leafy , pugent herby fragrance, but also exposing the until -then hidden bunches of glossy ripe currants,shining like Elvis Presley’s bluish hair and glinting like round marbled grapes, in some profusion.I soon got down to gathering this newly -found treasure . I was equally surprised at the weight of fruit this one bush had given birth to. It weighed just under one and a half kilos; enough to attempt jam-making for the first time.
I’d planted the blackcurrant cane in my garden a couple of years ago and last Autumn I took several cuttings which have also grown into several bushes.These may be ready to harvest next year but today I had the opportunity to make the first jam I’ve ever attempted. It’s a pity you can’t smell the evocative result ,but it brings back dappled summery images of over forty or fifty years ago for me. I can still see my grandfather’s snowy head of hair and hear my Uncle John’s country twang as he chivvied the wee donkey away from his black currants.There’s nothing quite like that taste and smell of home-made black-currant jam. It’s said that of all our senses , smell is the one that unlocks the secrets of memory. That’s what the smell of blackcurrant jam does for me .It allows me a secret doorway into the roots of my family in Ireland.
…………………………………………………………………………………………………………….

9 Responses to THE HIBERNIA MYTHOS, THE ORIGINS OF RACISM AND BLACKCURRANT JAM