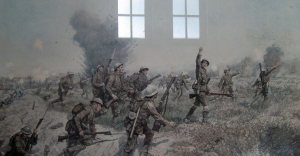 Imagine the scene. A maniac has entered a house, intent on killing all there. The father of the family is away at work and arrives just as the maniac is about to start his lethal work. Heroically the father tries to stop the maniac in his tracks with a kitchen knife, but fails. The maniac then kills all in the family. On his way out he is run over by a bus.

If you were remembering these events, what would present itself as the most prominent feature of the slaughter? Most people, I suspect, would note two things: (i) the courage of the father in his effort to stop the carnage before it began; (ii) the horrible and meaningless waste of life all round –  no purpose, bringing only grief.

Now consider the Battle of the Somme. What happened? Well, an awful lot of people lost their lives. Counting the several months after the battle, some one million men on all sides were killed. How did they die? In a multitude of ways. The poignant lyrics of The Green Fields of France bring that home:

Or young Willie McBride was it slow and obscene?

Why did they die? Because they were fed lies. That they were engaged in a noble battle for their country. That this was the war to end wars. That it’d be all over by Christmas. That it was a sweet and fitting thing to die for your country. The lies told by the imperial powers on both sides make the utterances of the BREXITeers today look like pure and shining truth.

What should we, one hundred years later, learn from this industrial-scale annihilation? That those who died were brave? Well yes. Although there’s no record of how many of them longed to get the hell out of there. So right,  significant bravery – that deserves commemoration.

Anything else? Yes – far more important than any courage shown by the tens and hundreds of thousands who died: the pointlessness of it all. It didn’t bring a world free of wars; it didn’t create, in England or Germany (or Ireland) a home fit for heroes. The Somme and other similar battles from the Great War simply opened their gaping mouths and ground the life out of young, gullible men.

Do we commemorate – or even mention – the pointlessness of so many deaths? Do we take any lessons from it? Do we make speeches vowing that we will never again allow our sons to be led off to foreign fields to butcher others and be butchered in turn?

No. No lessons here. Only sweet-sad bugle calls and sighs at the nobility of their sacrifice.

Well the sorrow, the suffering, the glory, the pain,

The killing, the dying was all done in vain.

For young Willie McBride it all happened again

At how many cenotaphs and war memorials will that verse be sung?

25 Responses to Honouring the old lie