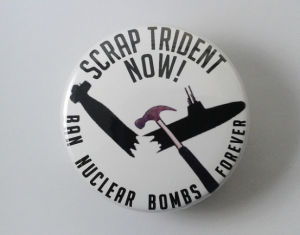 Yesterday in the House of Commons, MPs voted by a huge majority to renew the Trident nuclear programme. We could argue all day about how much it’ll cost: some say as little as £30 billion (yes I know, Virginia), others as high as £150 billion. The cost, however, is not my main concern right now. It’s the morality of such weapons.

What are nuclear weapons used for? Like most weapons, they’re for killing people. This in itself is sad and cruel enough; but nuclear weapons are unique in one way: they’re intended to kill civilians. That’s what they did at Hiroshima, that’s what they did at Nagasaki in 1945. The Americans have always justified Hiroshima and Nagasaki on the grounds that Japan made an unconditional surrender shortly afterwards.

Why did they surrender? That’s obvious: the Japanese people were terrified more such weapons would be unleashed on them, so their government surrendered.

There’s a name for this kind of warfare; it’s called terrorism. Which may come as a surprise, since we’re used to the term ‘terrorism’ being applied only to paramilitary groups like the IRA or the UVF. And indeed, one of my dictionaries defines terrorism as “The unofficial or unauthorized use of violence or intimidation in the pursuit of political aims. “ Note that word ‘unauthorized’. ) But another of my dictionaries says simply “Terrorism: An organized system of intimidation.”

But whichever definition you choose, there is no doubt that nuclear weapons are designed to terrify the other side into non-belligerence. For the system to work, both sides must be convinced that the other isn’t bluffing and will press the button if they see that as necessary. Jeremy Corbyn has been widely scorned because he says, were he Prime Minister, he would not press the button – that is, he says he would not engage in a terrorist act. And yes, I did say he is scorned, berated, condemned for taking that position.

No such scorn can be directed at Tom Elliott, Danny Kinahan, Nigel Dodds, Ian Paisley, Gavin Robinson, Jim Shannon or David Simpson. Yesterday all of these men voted for the use of terrorism on a massive scale. Which should mean we won’t hear any of these men denounce IRA terrorism ever again. Right?

View all posts by Jude Collins →
Jeremy and the mad people
THE HIBERNIA MYTHOS, THE ORIGINS OF RACISM AND BLACKCURRANT JAM

15 Responses to How to be a terrorist