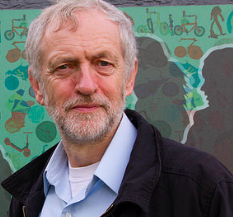 The challenge to Corbyn’s leadership is about more than a few disgruntled MP’s, it is a battle between two diametrically opposed forces over the structure of society and the rights/place of every citizen therein. To opine a lyric, it is ‘truth and love against the force of evil’. Make no mistake about it – Jeremy IS a threat and a liability, but to whom? To the Establishment. But more specifically, to the banking elites, intelligence agencies, the military-industrial complex, to big business, to the exploitative bosses/agencies and to those in whose hands wealth and power is undeservedly concentrated (including many Labour MPs).

Here is how far we have regressed. The former Tory Prime Minister in the 70s, Ted Heath, was recognised as being to the left of Labour PM Tony Blair in 2007 on every issue, and by implication, to the left of Owen Smith and Angela Eagle who worship Blair. Under Heath’s Conservative Government, income tax for top earners was 83%, while under Blair it was a measly 40% and with plenty of loopholes to evade. Blair believed in the market economy, in deregulation, in the centralisation of power within the City of London, and opposed any enhancement of trade union rights. He was the heir and son of Thatcher, despite her balking at some of his privatisations. Heath by contrast presided over a mixed economy, whereby investment went to industry and infrastructure, and unaccountable and unregulated financial services were subject to capital controls. Despite being elected to tighten the purse-strings, Heath threw money into ailing industries to achieve full employment.

Now all Jeremy is suggesting is a sensible return to the model of the mixed economy, like in Germany, to avoid another financial crisis like in 2008. But now that we will leave the European Union (thankfully), Corbyn has the wind at his back. If elected, he will have no fiscal treaties inhibiting him from developing the economy and enhancing living standards to at least the level of Scandinavia. Nor will he have to negotiate with over 20 right-wing governments to advance UK interests in areas of trade and spending. Norway isn’t in the EU and it is the most equal country on Earth. Therefore, in the post-Brexit arena, the Establishment fear the lack of restraints they can deploy to hinder and destabilise him. But they aren’t finished yet.

Labour is an old party, it has been around for over a century – with the aim of getting working men and women into parliament. But, almost inevitably, it became wedded into the Establishment, just like the Democrats in America. In opposing the renewal of Trident, Jeremy remembers all too well that it was a Labour Prime Minister who built the atom bomb in Britain without telling the Cabinet. He also knows, I suspect all too well, that socialists who became Labour Prime Ministers have been destabilised, blackmailed, spied upon, undermined and destroyed, by the powers that be. Much of their progress was reversed by the pain of the Thatcher years.

What is it though that Jeremy represents which these people cannot stand and are so afraid of? Clearly his is an agenda of: Green environmental policy; full employment; workers’ rights; free university for all; removing PFIs from the NHS; Investing substantially in public services; taking transport into public ownership; building enough homes for everyone; advancing the rights of women and minorities; ending militarist foreign policies abroad; ending the consistent surveillance of society; banking regulation; and redistributing wealth and power to all. But, put more eloquently, he asserts the right of each person to have the resources and support they need to write their own best-selling life-story, with a plentiful supply of pages and ink in the form of opportunities. That includes everyone, from the road-sweeper to the financier.

Jeremy also understands the peril that a Conservative Government could follow his tenure as Prime Minister and reverse much of the progressive initiatives he would have spear-headed. So I believe he’ll go even further and begin the process of drafting an actual written constitution for the UK (which doesn’t even have one), in which all of the policies I listed will be installed in law as a Bill of Rights, with only the people being able to remove these in a referendum. That means permanent power to the masses. It means never going back to rampant inequality and austerity measures. It means looking back in years to come and thinking how primitive life was before he was elected. It means using socialist economic planning to give you the peace and quiet to live your own life.

It’s okay saying all of this, but what about that claim that he isn’t electable? Well, he has won every by-election since becoming leader, with increased majorities. He won the London/Bristol Mayoral elections. And he improved Labour’s share of the vote in the Local Government elections. Now that’s better, statistically and in terms of party morale, than the performance of either Gordon Brown or Ed Miliband, neither of whom could quite make the final break with Blairism. He has also increased Labour’s membership by over 300% and counting – which was far higher than in the 1997 landslide.

So the problem isn’t that he cannot win elections, the real issue is that the establishment don’t want people to have him as an option on the ballot paper – with the attitude, ”How dare ordinary people elect someone we don’t impose on them”. Even former Colonels have advocated military coups and defiance against Corbyn when elected PM. That is a real reflection of this vibrant democracy we are always told we live under. But the message which every self-respecting and fair-minded person who supports him has to send to the Establishment (inside the Labour Party and out) is quite simply, he isn’t the only one of his kind. As humans, we have almost become accustomed to grieving and hypothesising for decades over the deaths of great leaders, whose lives were tragically cut short in often suspicious circumstances. Most of whom tended to offer radical and progressive alternatives to the status quo. But would the deaths and undermining have happened if the people who carried out the killing or sabotage knew in advance that their actions would result in a replacement just like the deposed leader? I think not; after all, better the devil we know.

When re-elected, Corbyn needs to take the fight to the Establishment, and before cleaning up office as Prime Minister he needs to preside over some house-keeping duties as Labour leader by enacting a de-selection policy in the name of party democracy and adequate representation of member’s views. Few people in this economy have a job for life, so why should MPs? Especially when some of these people don’t even represent the views, hearts and minds of the members who help put them there. They aren’t elected because individually they are Angela Eagle or Owen Smith, as though their ”magnificent” speeches garner the votes – they are elected because they claim collectively to be LABOUR. If they split from the Labour Party over Corbyn, like the SDP did in the 80s over Tony Benn, then the electorate will hand them all their P45s once Theresa chances her luck at the polls, because quite frankly, we already have a Tory Party to choose from.

A ‘New Dawn’ really has broken for Labour. But this time, Blairism is dead. We’re going to have a REAL Labour Government, and a Prime Minister who is both of Labour and for LABOUR. A Prime Minister who galvinises the hopes and dreams in the eyes of the population, and prioritises them into law. We don’t want Jeremy, we NEED him.

16 Responses to ‘Jeremy Corbyn: The People’s own MP’ by Donal Lavery