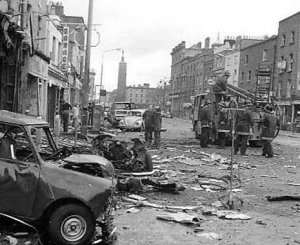 The interjection by Yasmine Ahmed, Director of the internationally respected Rights Watch (UK), in regard to RTE’s recent documentary ‘Collusion’, is a welcome development. Rights Watch has stated that there is clear evidence of British state involvement in murders in Ireland and has supported those that have sought to expose it. Ms Ahmed said “The British government must now accept that nothing but an independent investigation will be sufficient to ensure the families and victims have access to the truth and an adequate remedy”. This statement is in line with Irish government policy on the issue of the Dublin and Monaghan bombings of 1974 and Minister for Foreign Affairs Charlie Flanagan raised the matter with Northern Secretary Theresa Villiers.
In 2011, Mr Flanagan, as chairman of the Fine Gael parliamentary party, called for the expulsion of the Papal Nuncio over his alleged interference in Ireland’s sovereign affairs. Mr Flanagan said if any foreign government conspired to break the law in this state it would have its ambassador expelled. Mr Flanagan said the behaviour of the Vatican in regard to the revelations carried in the Cloyne Report amounted to the concealment of a crime and the Irish government expects the fullest cooperation from the Holy See, the Catholic Church in Ireland, and all other relevant bodies to be fully and totally subject to Irish laws and requirements. Mr Flanagan went on “If it transpires that the Vatican was complicit in a cover-up on the sexual abuse of children in Ireland, all avenues, including the severing of diplomatic relations between the Holy See and Ireland must be seriously considered. The safety of the citizens of this republic is paramount and it is the duty of government to uphold this principle”. Really.

On May 17th 1974 in Dublin and Monaghan, 34 innocent citizens of this state, men women and children, including a pregnant woman and a stillborn child, suffered the most horrific abuse possible. They were murdered indiscriminately in the most devastating attack in the history of the state. Following the publication of the final report of the Commission of Investigation into these bombings by Mr Justice Henry Barron, it was established that it was “neither fanciful nor absurd” that members of the security forces in Northern Ireland could have been involved in these bombings. Furthermore, it was established by Barron that files which may be of assistance in identifying those responsible for these bombings were in the possession of the British government. Despite repeated calls for these files to be released, the British government has refused. Surely this also is the concealment of a crime? No moves from Minister Flanagan to expel the British Ambassador to Dublin nor any move to recall Ireland’s Ambassador to London. Why? Surely if we are to be consistent in applying principles of justice and fairness, then all wrong doing must be exposed and those responsible made accountable. There can be no exceptions. The pursuance of truth and justice is the highest obligation and duty of society and the Irish government must never accept lesser standards of justice for her own citizens who have been murdered than the UK authorities do for theirs.

What would the consequences be if it were the case that the Irish government had in its possession files which might be of assistance in identifying those responsible for the Birmingham and Guildford pub bombings in Britain in 1974 in which 26 innocent people lost their lives, and if, following a request from the British government to release these files, they refused?  Both the British government and the British people would be rightly outraged. Ireland would be regarded as a pariah nation and treated accordingly. Furthermore, in seeking justice for those who were killed and bereaved in the Lockerbie bombing, the British government secured a trial, conviction, extradition and substantial compensation for the victims. Why does the Irish government accept lesser standards of justice for her own citizens who have been murdered than the UK does?  The possibility that this demand may cause diplomatic tensions between Dublin and London must not be a deterrent from our pursuance of justice for the innocent victims of these bombings. A friendship cannot be based on compromised justice.  If the new relationship between our two states is to prosper into the future it must be strong enough to confront and reconcile the past.

View all posts by Jude Collins →
A DISUNITED BRITAIN
Arlene offers a lesson: how not to deal with minorities

6 Responses to ‘Justice: now you see it, now you don’t’ by Tom Cooper