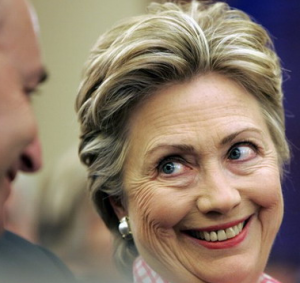 Hillary Clinton was on the verge of tears last night. The reports tell us she was “almost overocme with emotion as she entered the arena to loud cheers and embraced her daughter, Chelsea, who introduced her as the next President of the United States.  She took a deep breath to collect herself as delegates in the crowd were in tears”.

I don’t know if those feelings with which Hillary struggled were real or fake. I do know she had to show them, because the thing thousands, maybe millions of Americans don’t like about her is that she seems cold. She doesn’t have the likability factor. If she was a man, you wouldn’t want to go for a beer with her. Whereas apparently everybody wanted to go for a beer with George W Bush.

Too much. We ask too much of our leaders. They must not only be good at their job, they must be people that we admire physically or at least emotionally. Everybody remembers the near-god status of John F Kennedy, who took the US to the brink of nuclear disaster; people remember Lyndon Baines Johnston, and they appreciate (maybe) the work he did for African-Americans, passing crucial civil rights laws by arm-twisting, cajoling, bullying. But you don’t hear people saying “I loved LBJ”.  The great hope most people have is that Hillary will be elected President, because the alternative is not only racist and misogynistic, but because  he comes across as a strutting, narcissistic bully.

The truth is, we like our leaders to be good-looking (bald President, anyone?) and warm, and if they don’t display those qualities we often give into the temptation to dismiss them.

Which is sort of stupid, wouldn’t you say? Mercifully we don’t ask for likability from our surgeons (although think of the people who have had a medical operation and who tell you how nice the doctor was), or our architects,  or our  lawyers:  for the most part we just want them to do their job well and forget about going for that beer.

And yet, even when we know it doesn’t make sense, we yearn for, even demand the likability thing. I fervently hope Hillary gets into the White House, even though I don’t find myself thinking “What a lovely, lovable woman!” And I hope she wins because a President Trump with the nuclear button doesn’t bear thinking about. But also because of his hairstyle and the way he sticks out his lower lip.

We’re distinguished from the animal kingdom because we’re rational. But in politics, it’s a rationality that requires a heavy sprinkling of irrelevant personal qualities. In the end, we’re not really too bright.

Clinton appeared almost overcome with emotion as she entered the arena to loud cheers and embraced her daughter, Chelsea, who introduced her as the next President of the United States. She took a deep breath to collect herself as delegates in the crowd were in tears.

View all posts by Jude Collins →
Murdered French priest: politics or religion?
IF NORTHERN IRELAND GETS THE FLU

13 Responses to Love that little Hillary