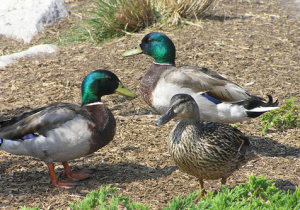 You may have noted these past few days that I’ve referred to the First World War and challenged the oft-repeated falsehood that nationalists and republicans in Ireland and their publications have forgotten, or deliberately airbrushed out, Irish involvement in it. I’ve posted on my BLOG pieces I’ve written, including one first published 30 years ago, in July 1986 on the 70th Anniversary of the beginning of the Battle of The Somme.

My purpose was to ambush supposedly authoritative commentators and pseudo experts peddling canards. The word means “ducks” and I invited you to join me in a Duck Shootin’ Expedition.

I suggested that any Shelmaliers amongst you with  “your long-barrelled guns of the sea” or punt guns, might give some low, lying punts, a good Ducking.

Fergal Keane in THE IRISH TIMES on July 1st obligingly presented one of his old canards.  It’s nailed now and I expect that veteran pretender to try Faux Canard the next time.

I also posted a piece on Tom Kettle that I’ve had published in whole or in part in various publications over some years. My father used to work with Tom’s brother Charles in the Irish Land Commission, and with a veteran of the First World War whose son I know. I met Charles Kettle when I was 8 or 9 years old.In those days I met old IRB men and IRA men who worked for the Land Commission, and, contrary to the nonsense peddled by Fergal Keane and his ilk, people got along fine together whatever they had done in their youth. I myself have worked with men who were on opposite sides in the Civil War or were in the British forces.

Taliking of Tom Kettle, he was quoted by a clergyman in Westminster Abbey on the eve of the centenary of the Somme. But he didn’t quote the poem I quoted, nor Robert Lynd’s comments on Kettle or on James Connolly. They wouldn’t sit easy with the an agenda designed to steel today’s Britons, and Irishmen and women, for a repetition of the imperial blunders of the past.

Please help with the sport of Duck Shootin’ and the sinking of Low, Lying Punts.