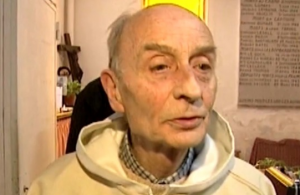 The killing of the 84-year-old priest in Normandy, while he said Mass, is as gruesome and horrifying a killing as you can imagine. Confronted with such actions, it’d be understandable if France were to lurch to the right and say “Enough – we can’t allow this any more” and follow through ruthlessly, curtailing civil liberties, dispensing with laws of privacy,  going after the Islamic community in France and dismissing those who’d have any qualms as bleeding hearts.

That’s why Pope Francis’s reaction was outstanding.  “The world is at war because it has lost peace,” he said.  “There is a war of interest, there is a war for money, a war for natural resources, a war to dominate people. Some might think it is war of religion. It is not. All religions want peace.”  He refused to make the knee-jerk interpretation, that this is a modern form of the Crusades. He rightly identified that these kind of killings happen because there are those people and states who want to seize resources, subjugate.

It’s easy to understand why most other comments and reports ignore the Pope’s interpretation. The whole emphasis in France has been, is the state secure enough, what can we do to make people more secure, what powers do we need to stop these murderous psychopaths?

That was the line which the British state and unionist politicians took to republicans during the Troubles, and you can see why it happened. You’d have to forgive those who would respond to the priest’s death by launching an equally brutal armed response. But just as repression didn’t work here, it won’t work there.

In fact, the conflict that is born out of the Middle East has a  considerable degree of equivalence with here. In both cases it was a political clash, with the British armed forces attempting to put down what they saw as an insurrection; and that political clash was threaded with elements of revolting sectarianism on both sides.

When you hear of the horrors of the French priest’s death, you can see why those who were hurt in our Troubles find it  hard to forgive those who inflicted the pain. But somehow, to our credit, we have by  and large surmounted that primitive desire for  revenge. We have found ways, however haltingly, of working together. And that’s why it’s important that unionism and republicanism/nationalism, despite the temptation to do otherwise, must both sides engage in positive acts of reconciliation, acts that’ll help make the suffering of the past more bearable.

We’re half-way in our attempts to manage the pain inflicted on one another;  the French and Germans are only beginning.