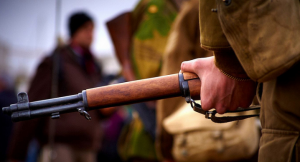 While plotting with France and Russia to destroy Germany, the British Establishment echoed the Boy Scout  motto -“Be Prepared.”  General Baden Powell,  hero of the squalid British war on South Africa, prepared youth to be fit for the next Imperial adventure, and Government measures to improve public health made no secret of the fact that they were inspired to remedy conditions that had rendered great numbers of young men unfit for military service. Secret arrangements were made between French and British Military Staff which proved so effective that Britain had its expeditionary force across the Channel

in jig time in 1914, and though the war wasn’t over by Christmas 1914, it was nearly two more years before she needed to introduce conscription. British propaganda was so powerful, so unscrupulous and  so dishonest that huge numbers  volunteered for “Kitchener’s New Army.” The Official Secrets Act gagged those in the know, and imprisoned those who told the truth and was in effect years before the war. It is still in force today. Secret Services later called MI5, MI6 and the Devil knows what else, were well established and naval intelligence was superb.

I used the words British Establishment rather than British governments because in August 1914 some members of the (Liberal) Cabinet knew nothing of the specific preparations made for the war on Germany. I imagine they did know of the massive fleet of huge battleships and auxiliary warships, the establishment of a Territorial Army, trained not for local defence but for continental action, the unrelenting anti-German propaganda. But they may have been unaware that Sir Henry Wilson, when intriguing with the Curragh mutineers, was merely taking a short break from coordinating British and French plans for their war on Germany. Asquith, Grey and other Liberal leaders and Conservatives such as Arthur Balfour were all in the conspiracy together for almostten years. Those men were not sleepwalking into war.

On television recently we were shown into part of  the PORTON DOWN laboratories, created for waging chemical and biological warfare. We were not told that those showing us around were bound by the OFFICIAL SECRETS ACT and were merely following a script either written for them by the government, or amended by a government censor.

The most horrific illustration was of victims of chemical weapons used by Iraq in what is called the Iran-Iraq War in 1983. We were not reminded that Iraq attacked Iran in 1980 with the full backing of the United States and Britain, and  was armed and equipped by them and their helpers in some Arab states and by Israel. Soviet made and Soviet designed weapons, some of which had been captured by the Israelis, others which had been in other hands, were given to Saddam Hussein in order to obscure Western involvement.

But we do know that the late Sir Patrick Mayhew, when British Attorney General (or Solicitor General) did his best to cover the Government’s arse during the “Arms to Iraq” scandal.

We were not told whence the chemical weapons used by Saddam Hussein originated, I’d be surprised if the British Intelligence Services didn’t know. Certainly the Porton Down spokesman didn’t say that they were Iraqui manufactured, or Soviet manufactured. I strongly suspect that they were supplied by the West. But I know for a certainty that nobody bound by the Official Secrets Act would tell us.