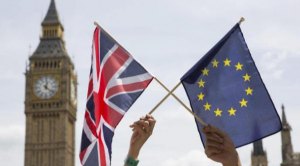 As someone who has a fascination with the Second World War, it has always interested me how delicate a game of chess the British ruling class played and won in the context of the European continent. The British, with clever astuteness, knew when to oust Neville Chamberlain and the politics of appeasement, and welcome in Mr. Churchill and the campaign for survival as a free independent nation. Enoch Powell once opined that Russia, not America, has always been the key to Britain’s survival – stating how Chamberlain could easily have gone to the French and to the Russians with a collective proposal to threaten Hitler with immediate war if he broke the terms of Versaille Treaty, averting the heavy losses sustained by all three nations. If such farsightedness has been shown, we may well have been spared the horrors of war.

The British ruling class knew that the European Union is a failed project, even if they didn’t wish to say so. If they didn’t consider it as such, we would never have been granted a referendum in the first place. The British working class confirmed the same view in the result. You might say the result was a repeat of the UK’s 1939, realising that a fight was required to avoid annihilation as an independent nation. So in that regard, both classes conclusions were in harmony and will prove correct in time. But what sort of model will now follow the extensive period of talks which will happen when Article 50 is finally triggered?

Now, I remember a Christian Brother teaching me, authoritatively, that statistics are a wonderful thing. They are not emotional, nor subjective, like human viewpoints. Numbers say what they mean and mean what they say. They cut through the rhetoric and jargon and get straight to the point. In this respect, it is quite clear that it would hurt the European Union countries far more not to have a free trade deal with the UK, than it would hurt the British side. There is no way that the many automobile and technology manufacturers in Germany, which constitute a massive pressure group, are going to allow Angela Merkel and Wolfgang Schauble to arrive at any agreement which damages this vested commercial interest. Mrs. Merkel has already confirmed her willingness to concede such an arrangement, stating that there is no need for nastiness towards Britain and that they can indeed access the Single Market at some price. The Germans and the British think similarly on the economy and follow the doctrine of monetarism, denouncing any barriers, taxes or tariffs on enterprise.

But what of the French? The nation which famously vetoed British entry to the EEC, with De Gaulle’s loud and uncompromising ”Non” to successive UK Prime Ministers. The Treaty of Maastricht allowed Germany to reunify, but it aimed to control German power, with the objective being a European Germany and not a German Europe. As a result, the Germans had to concede bureaucratic and financial control in Brussels, the ECB and the IMF, to the French elites. Indication of this can clearly be found in the fact that the past two Managing Directors of the IMF, Christine Lagarde and Dominique Strauss-Kahn, are both ex-Ministers of Finance for the French Republic. But that was then, in the early 1990’s. This is now. Germany has a much larger population, contributes more to EU coffers, and holds more seats and sway in the EU Parliament/bureaucracy. When news of the British referendum reached France, they stated they would roll out the red carpet for a British exit. But the concessions granted to David Cameron in a bid to get the UK to stay, tell a different story of who really runs Europe.

Based on what the powerful players involved in all of this have said, the sort of model the UK will work in relation to its relationship with the European Union is clear. There will be a free trade arrangement, which will involve British authorities adhering to a certain amount of compliance to the trade and environmental regulations of the Single Market. To access this, the UK will have to make some financial contribution towards the EU budget. Just like in Norway and Switzerland. But unlike with Norway and Switzerland, the UK is a BIG country of 67 million people and presiding over the fifth biggest economy in the world, with the second highest NATO budget and the financial centre of the world being the City of London. So when it comes to the free movement of people, the solution will be a financial one. In return for the UK being allowed to restrict the free movement of people, which the Single Market entails, the British exchequer will be required to pay a larger contribution to the EU budget than the percentage paid by Norway and Switzerland. This will happen because it is all things to all people – The Tories can claim to be reducing immigration; The French can claim that Britain is getting no special treatment by paying extra; Mrs. Merkel can assert that German industrial interests have been preserved.

But how much? That will be the main purpose of the negotiations following Article 50. However, given that the Leave side advocate how Brexit would save money, no British Government will be able to accept any offer from the European authorities which demands that they pay more than they did when they were actually members of the European Union. So, contrary to Mr. Gove’s claims, £350 million a week will not be available for the NHS, because that figure was based on the ideal stipulation that Britain would have to pay nothing to enjoy the benefits of the EU after leaving it. But it will be less than the £10 billion plus, which is currently paid after the rebate is taken into consideration.

Will this result in a hard border with the South of Ireland?

The answer to that is no. Such a re-partitioning of the island would be bad for business and in the end the importance of free trade to the main players in all of this has shaped the issue more than anything else. The UK Home Office have already indicated that a border area could be avoided by setting up enhanced security and immigration arrangements at airports. Irrespective, it would not impact on Brits or Irish either way because a common travel and citizenship agreement was enshrined in law in both jurisdictions prior to either even being a member of the then EEC – Irish citizens could always vote in UK elections and join the British Armed Forces.

What good will come from all of this?

Well for one, the people of Europe will begin to realise that big changes are required. The undemocratic nature of the EU institutions will have to be addressed, otherwise more member states will leave. The failure of the euro as a currency has been validated, with the ever shrinking Eurozone markets being a key aspect of British discontent for remaining. Most member states were highly successful, prosperous and capitalist countries economically, prior to joining the Single Currency – so what would be so bad about going back to using one’s own currency and deciding one’s own spending priorities?! The Celtic Tiger in Ireland began years before joining the euro. Many of us remember the golden years of getting goods and services cheaper when using the Puint. All of the rights currently enjoyed by EU and UK citizens living in the UK or other EU states, will, under international law, be preserved. The suffering and oppressed peoples of Greece, Portugal, Spain and Italy, will all begin to realise that life and prosperit outside of this failed project is possible. When it finally breaks up, as more and more member states forget the price of nothing and remember the value of everything, we shall all go back to the old progressive Keynesian model of tax and spend which rebuilt Europe following the end of the War. This means higher taxes on the biggest earners. This means an enlarged and expanding public sector, with substantial investment in infrastructure, with no more EU fiscal treaties dictating the levels of our deficit to us. It means everyone being able to have a job and a home in the country in which they were born. It means the ability to be an independent self-governing nation before the eyes of God. This isn’t idealism – UK debt remains only 80% of GDP when it was almost 300% of GDP after the War, yet people still enjoyed the building of the NHS, free university, 300,000 houses being built per year and full employment. It is realism – when you exercise real sovereignty in your homeland, you can purchase with your vote that which you cannot afford with your wallet or purse.

-Yes, mistakes will be made. But the beauty of democracy is that it allows us to make our mistakes and learn from them. Mistakes are not a reason against being able to decide your own destiny, they are a motivating factor in enhancing your own destiny. No the UK will not be a member of the EU or have a seat on the Commission, but it has never been in the Eurozone yet still influences the rules. The concentration of power and resources in the City of London ensures that the UK voice outside of Europe, will fall loudly on attentive ears. Cooperation, yes. Integration and accession, no. As countries like Greece eventually depart from the EU and feed their hungry children and ailing populations, they will remember with glee the failure on Mr. Cameron’s shoulders to ”keep the show on the road”, and restore some national pride therein.

View all posts by Jude Collins →
‘Jeremy Corbyn: The People’s own MP’ by Donal Lavery
Nice killings: why?

2 Responses to ‘Post-Brexit Britain: The fall and rise of European Solidarity’ by Donal Lavery