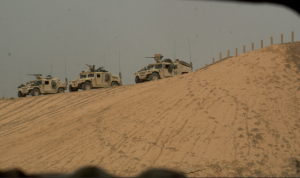 Picture the scene. I’m in a room with, let’s say, ten friends. (Yes, Virginia, that may stretch your imagination but I’m talking hypothetical here. Of course I don’t have ten friends).  So we’re sitting there conversing when in rushes a red-eyed , wild-looking man. “Help me!” he shouts. So myself and friends enquire how we can do this. “I’m trying to get down to Dublin to kill a man, but while I have a car – and a gun – I don’t have money for petrol. If you and your friends pitched in say £1 each, it would solve my problem.”  So we look at each other, put our hands in our pockets, give the man £11 and wish him God speed on his murderous quest. Next morning, the papers are full of it – a red-eyed wild-looking man has gunned down a  man in Dublin.

Question:  Am I and my mates in any way complicit in this killing? Of course we are. We didn’t pull the trigger but we did facilitate the killing by providing petrol, or cash for petrol.

Now consider the invasion of Iraq in 2003.  The MPs in London didn’t actually go out to Iraq and bomb and shoot tens of thousands of people. But they did make it possible – they facilitated Tony Blair on his ill-fated assault.  Those MPs who voted for the invasion, one and all, were complicit in mass slaughter.

I know I’m in danger of becoming a bore about this, but why has none of the media seen fit to confront these MPs with the consequences of their actions?  Tony Blair has had his feet held to the fire – which is not the same thing as being sent to jail, I know. But he has been the subject of a great deal of criticism, to the point where I almost feel sorry for him. The fact is, there were many hands lent to what we all knew would be a futile enterprise. But all of the unionist MPs of the day – to take only the group we’re most concerned with – voted in favour of invasion. Like myself and my hypothetical friends,  they made it possible for soldiers and airmen to be sent half-way round the world, where over a hundred of them would be killed, even as they sought to carry out the instructions of their political masters.

The silence is deafening.

View all posts by Jude Collins →
THE LITTLE WORLD BEFORE THE 1916 RISING AND THE BATTLE OF THE SOMME by Donal Kennedy
Why did Dallas snipers kill five police officers?

7 Responses to Providing the petrol for slaughter