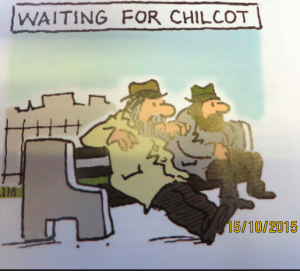 That’s because it’s 2.6 million words long. The best parallel that I’ve seen is that it’s three times as long as the complete works of Shakespeare.

I watched Alastair Campbell and Clare Short on Newsnight last night. Both talked in detail about the report; after they’d finished I was none the wiser, other than that they’d both acted with impeccable wisdom during the crisis. But of course Campbell and Short haven’t read the Report either. How do I know? Because it would take you roughly eight hours per day and one full month to read the Report’s contents.

Why is it so long? Well it took seven years to complete, so I suppose they didn’t want to look as though they’d been sitting round drinking tea and playing cards. Accordingly they produced this impossibly long Report. And presumably were paid handsomely for their labours over the seven years. As were the several media people  who’ve been explaining its contents to us over the last twenty-four hours. Although of course they won’t have read it either.

Parting thought. Might  it be possible that…Nah, that’d be an unthinkable…Oh, OK. Might it be possible they made the report as mind-bendingly long as it is so that scarcely anyone in the world would read it? If the primary purpose of writing a report is that it should be read, Chilcot has been a massive failure in communication. But if the intention of the authors was that next to no one should read it, they’ve been brilliantly successful.

I’ll bet Tony Blair is pleased with that.

39 Responses to ‘Reading the Chilcot Report. Sort of.’