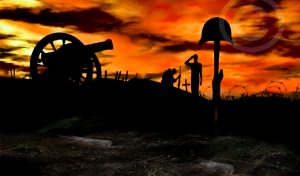 “My first night in the trenches” said my Uncle Ned, an old,  then still in his sixties, Dublin Fusilier, “I’d peep over the parapet, duck, Bless myself, then peep over again”.

Yours truly, less couth, Christian and courageous than he, would have substituted another verb for “Bless” if in a similar predicament. Some years ago I had a short tour of the killing fields of Flanders,where he served during the First World War.

Many of the trenches and the shell holes still survived, and in places, such as Vimy Ridge, you could toss a cigarette butt across the opposing lines. Cemeteries abound, big and small, where identified bodies lie in egalitarian portions of earth, separated only by the Colours they served. Other human bones are gathered in ossuaries, one of which is said to contain the bits and pieces of  16,000 men.

cIn the British Cemetery at Cabaret Rouge, near Arras, the first stone, to the left of the gate, covers J Connelly, a Private in the Lincolns, killed May 1917, and nearby another covers J Connolly, a Sergeant in the Munsters. At the arrogant and ugly  Triumphal Arch at Thiepval, dedicated in the 1920s by the genius of the Somme Offensive, Earl Haig, a register of  74,000 men whose bodies were never found contains three pages ofKennedys.

The Battle of the Somme began on 1st July 1916 and at the site of its beginning lie row upon row of Inniskillings and Royal Irish, mainly recruited from Carson’ s anti-Home Rule UVF, killed that same day, when the British forces sustained 64,000 casualties, 16,000 of them fatal.

With them lie Dublin Fusiiers of mainly Nationalist sympathies, killed the following November on the same spot, for, when the “Brasshats’  ” plan of a quick breakthrough failed, they persisted in their futile attacks until they had lost about a half a million men.

The Ulster Division has an imposing memorial, whilst the soldiers from Ireland’ s three other provinces, whose sons died as bravely and as needlessly, are commemorated by a modest Celtic Cross.The scale of the slaughter, there evident, overwhelms feelings for any particular family, province or nation. The tragedy is universal.

Those who fell under the British flag have uniform headstones, embossed with regimentalinsignia.From a distance you cannot distinguish Christian, Jew, Hindu, Moslem or non-believer, though all are well represented. But the graves of German and French soldiers, in their separate cemeteries are mainly covered with crosses, liberally interspersed with tablets bearing the Star of David,in the case of the Germans, and the Islamic Crescent with the legend “Mort pour La France”  in the case of the French. The subsequent records of Germany and France need no elaboration here. But it shouldnot be forgotten that British Governments do not have immaculate records for their treatment of  the Lesser Breeds and those Beyond the Pale. Indeed in many cases they have destroyed the records.

I started my tour at Arras, where, in 1640 a garrison of 1,500 men in the Spanish service, 400 of them Irish, and all under the command of EoghanRuadh O Neill, held out  for three months against a besieging French army , building up from 30,000 to 100,000 men, and only s urrendered when orders came from the Spanish King.The garrison was allowed retain its arms and its banners as it marched out, ending Spanish rule after a period of 150 years. The French commander complimented Eoghan Ruadh (the future victor of  Benburb) with the remark that   O Neill had beaten him in all but fortune.

I had meant to do research on that episode, but gave up, finding that today’ s Frenchmen are a peculiar lot, and not disposed to remember kindly, soldiers, however gallant, who occupied their territory for a Foreign Power.

One Response to  SERMONS IN STONES   by Donal Kennedy