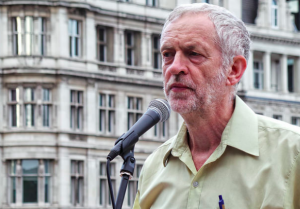 One of the nastiest features to emerge from the BREXIT bomb-shell – and God knows there are enough contenders – is the blood-lust within the Labour Party.

Ever since Jeremy Corbyn was elected and BREXIT was a fairly distant speck, the British Labour Party MPs have been scratching their heads to come up with a way to rid themselves of their turbulent new leader. In this they were ably assisted by the Tories, in whose interests it is to have a Labour Party riven with dissent.

At first it was the way Corbyn dressed. Could he not get a nice suit and tie and be like the rest of us? Sure how could you have a leader that didn’t know how to dress properly? Then it was the May council elections: the Labour Party would suffer terrible defeats, so here’s the thing, should we dump Corbyn before the elections or after?  The decision was taken to wait until after, in the hope Labour would lose  shedloads of seats and Corbyn be held responsible. Come the May council elections and…Oh crikey,  the Tories have lost four times as many seats as Labour.  Talk about frustrating.

OK then, let’s shift to the election of London mayor. Surely Labour will fail there again and we can blame Corbyn? Um, no. It appears the Labour candidate Sadiq Khan has won the London Mayoral race.  Mmmm. What about the by-election to the seat Sadiq Khan vacated to become mayor?  Isn’t the Labour Party candidate Dr Allin-Khan a cert to lose the seat, and we can blame Corbyn for that? Oh no. Disaster. Dr Allin-Khan has held the seat with an increased majority.

So now we’re  looking hard at the way Corbyn conducted himself in the BREXIT campaign. Wasn’t he lack-lustre, didn’t he fail to speak out,  wasn’t he essentially a waste of space?  Look at the way David Cameron was everywhere,  delivering fighting speeches – invoking Churchill and all that. OK Cameron lost, but he definitely put his back into it. Unlike Corbyn.

Now that last criticism is true: Corbyn didn’t campaign for the Remain side in anything faintly resembling the way Cameron did. Cameron was all about Churchill and the British never running away from a fight, and look, here’s Barack Obama and he agrees with me!

No, Corbyn wasn’t like that. Have you watched any of the interviews he did?  I have.

For a start,  Corbyn speaks in a normal, conversational style. Cameron preferred to bray of the greatness of Britain, the need to protect our borders, the fact that Turkey won’t get into the EU until the year 3000.  In contrast, Corbyn identified the ways in which the EU has protected workers’ rights, women’s rights, supported farmers, supported education, developed infrastructure.

He also, quietly and with clarity, talked about the dangers of TTIP,  the proposed US-EU treaty that plans to hand huge power to multinationals. He spoke about the disconnection between ordinary people and the EU, the need to have its decision-making more representative of the people of the EU.  In short, Corbyn made it clear he wanted Britain to remain in the EU but he wanted to make the EU a very different organization. As Oscar Wilde might have put it: there is only one thing worse than being in the EU and that’s not being in the EU.

In short, Corbyn engaged in politics for grown-ups.  He presented  a full picture of the EU and what it meant. He told his listeners that he wasn’t an uncritical fan of the EU, he was a critical friend of it, and he would urge major reform of the institutions, assuming Britain voted to stay.

But Britain voted to leave, and now Labour Party MPs are busy saying in a range of different ways “It’s all Jeremy’s fault!”  That’s why, led by Hilary Benn, so many of Corbyn’s fellow-MPs have resigned from the shadow-Cabinet.  Their claim is that Corbyn would be a bad leader for a general election that could come before the end of the year.  No mention of the fact that they might be deselected by Labour party members who elected Corbyn in the first place and are getting more and more fed up with being treated as the voiceless masses.

Maybe in the coming weeks Corbyn will die the death of a thousand daggers and we’ll be looking at another more Blair-like leader.  Alternatively, Labour Party members may have rallied to protect the man who had the courage to address the electorate as adults and who focused on policy, not personality, in political matters.

It would be nice to think that Corbyn’s example will mean that in Britain, you no longer have to sink to the level of  a Nigel Farage or a Boris Johnson or a Donald Trump in order to be successful in politics.  Nice, but alas, unlikely.

THE LIES THAT BIND
‘Tom Kettle – isn’t he a household name in Ireland?’ by Donal Kennedy

23 Responses to That Corbyn: he’s an embarrassment