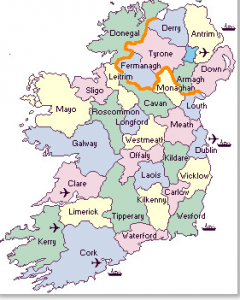 One of the main arguments against the reunification of Ireland is that the north is unviable and the south cannot afford us. Now the first point I would make is we are talking about reunification of our country which is presently one  country with two jurisdictions operating independently resulting in two economies and two political administrations one Irish administration led from Dublin controlling the 26 counties with London administering the remaining 6 it refused to give up when Ireland voted democratically and overwhelmingly for independence.  When the East Germany economy collapsed, reunification was the solution and the same will apply in Ireland.  Dublin cannot wash its hands of the north and the Good Friday Agreement only delays the inevitable until such time as there is a clear majority who support unification.

In other words, the problems caused by partition are with us indefinitely until we can persuade a majority in the north to support reunification as per the terms in the Good Friday Agreement.

So does the economic argument stack up?

First of all, the Irish citizens in the north are as equally Irish as any individual in the 26 counties.  Because we have had to endure more discrimination from unionism in the past, a conflict started by unionists and actively pursued by the British state who remain still present and active through MI5 who are still recruiting to this day – that does not mean we can be simply dismissed by the southern establishment who have a duty to their citizens which they have neglected.

Having said that, I would not want to be an economic burden on our fellow citizens in the south.

Statistical information is not easy to come by. I have included the resources I have used to attempt to make sense of the economics of unification to the best of my ability based on simple google search to put it in context.  It would be great to hear other more expert opinions.

Based on the information I found in the sites referenced, the north will be totally and utterly screwed without free trade north south.

It is not in the UK’s interest to pay for such a free trade deal like Norway and Switzerland do, as they have a trade deficit to the EU so it would simply not make sense.

Based on these statistics, it is simply fallacy to suggest it is in the north’s best interests to remain in the UK post-brexit. That would be basically cutting off our nose to spite our face and leaving ourselves as a permanent charity case, totally dependent on England, which is not a position I could live with.

To be honest, the trade and GDP details for the north look a lot more positive than I was expecting and are double the cost of £20 bn to run our bloated public sector.

Is the subvention real or a deception to control us through fear of negative impact on our pockets?

I see no reason at all that through independence, the economy in the north would not also grow rapidly. We would not only pay our way but be one of the wealthiest regions of Ireland and a benefit in particular to the border counties of the republic but improve things for all of our people.

First of all, it looks as though the weekly 1Bn trade accounting for almost 50% of trade total being with the UK that has been mentioned during the brexit debates is actually a combination of goods in and out, and Ireland actually buys more from the UK than it sells to the UK.

The US is clearly our biggest trade partner and is the trade agreement most important to us in both parts of this island.

I suppose it is really down to would we have a better trade deal with the US within the EU or in an alternative trade agreement should England be able to forge one, post UK which is clearly about to fall and will reform.  Ireland alone and outside of any trade agreement with the US is simply not viable – there is no way we would get a better deal on our own.

I fail to see how any unionist can possibly look at these facts and say two separate economies and jurisdictions on this small island makes any sense whatsoever.

The biggest problem in the north remains reliance on the bloated public sector which still subsidises our economy.  It looks as though the report from Canada which shows how this public sector reform could in 8 years produce significant savings which would need to be invested to replace the jobs which would be lost.

Add to this the fact that there are more jobs throughout Ireland requiring immigration, then it really is a no-brainer.

It seems blatantly obvious to me that partition cannot be considered acceptable any longer and we need to be more proactive in demanding something be done about it, starting by telling the people what the economic facts are and proving that our politicians are putting the Irish people first and not imposing second rate standards on us to help the wealthier nations across the water and maintain unionist control for as long as possible.

Ireland needs to be reunified, we need to start discussing this and how to implement it once and for all so there is no additional cost imposed on the southern economy and unification happens to a phase of economic targets to be achieved which will allow full integration and create the benefits for all concerned that are clearly possible.

There is no economic argument against reunification from any quarter and all of the people on this island need to be made aware of this.

View all posts by Jude Collins →
‘Belfast Telegraph – Abusing the Memory of Fr Hamel’ by Eddie Whyte
Enda and Arlene and Danny: something in the Summer air?

24 Responses to ‘ The Economic Imperative’ by Jessica McGrann