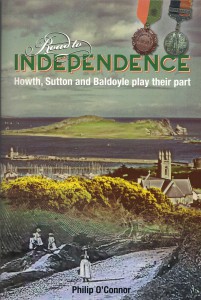 I lived the first 23 years of my life on Howth Summit and environs and although I always had an interest in history and haunted the local Library I knew almost nothing of the local cultural, social, athletic, economic, trade union and political movements in the area which culminated in the establishment of a democratic republic and its institutions, its defence against murderous oppression, its temporary interruption by an externally engineered civil war and final emergence in neighbourly reconciliation.

I knew of people living locally who had played famous parts on the national stage and had settled in Howth. I knew of a few local people who had been active. But knew nothing  of a great many unsung men and women, or whole families of fishermen, farm labourers, tradesmen and clerks who laboured for decades, fought when necessary, endured imprisonment and hunger strikes and neither sought nor received recognition.
They are all dead now and some of their descendants have remembered some stories, discovered letters and mementoes, photographs and other scraps of material. Philip O’Connor who has lived in Howth for 10 years has interviewed those descendants, examined newspapers and other documents covering 1900 to 1925 and has put the local story in the context of the national and international events of those times.
To read some ignorant or dishonest commentators you’d imagine a bunch of firebrands with death wishes launched an insurrection in 1916 in a country ruled by a loving government in a time of peace and with Home Rule assured, and that from 1919 to 1921 Republicans, armed to the teeth, waged  a campaign of terror on their peaceful neighbours and their British protectors.
When in 1912 James Connolly and James Larkin founded the Irish Labour Party it was their intention that it would contest seats in a Home Rule Parliament. When, in 1913
policemen broke the heads of Dublin workers, Connolly and  Larkin founded the Irish Citizen Army to protect the workers, following the precedent set in Belfast where Sir Edward Carson had set up the Ulster Volunteer Force to ensure that no Home Rule Parliament should be set up. In 1912 Patrick Pearse, who had no military interests or ambitions, shared a pro-Home Rule platform with John Redmond. In 1914, when Britain declared war on Germany, a war which her ruling clique had long planned, the world was changed, changed utterly. Carson and his friends were brought into the British Cabinet, and the General Election scheduled for 1915, was, like Home Rule, set aside.
And the fool John Redmond and his party sent   thousands of their Irish followers to fight and kill men with whom they had no reasonable quarrel, and to be themselves killed in that criminal Imperialist enterprise.
Philip O’Connor challenges the widely-accepted statement that among the National Volunteers who remained loyal to John Redmond, that the majority followed his call to enlist in the British Army. He states that throughout the whole war 28,000 – about a fifth of the National Volunteers, joined up, most of them in its first year. He has established that by the end of October 1914 just 60 men in County Dublin had enlisted, of whom 48 had been in the Volunteers, and that by the end of November only 104 National Volunteers, of a total of over 4,000 in the County had followed Redmond’s call.Given recruitment figures for the rest of the County, he says,that at most a dozen of these men were from Howth and Baldoyle, and that even of these, probably a third were reservists anyway, who had no choice when they were recalled to service.
Recruitment throughout the war was far more successful in the cities, and in Dublin the great majority of recruits were not members of the Volunteers at all, but firstly either reservists or men from the impoverished tenements of the inner city. or men from the Protestant Unionist community who enlisted from a sense of British patriotism.
Total recruitment throughout the four years of war in the Howth-Baldoyle area came to about 110 men, sixty in the first year, with nearly a third from the Protestant community, another third from the poorer, labouring families, and a minority from the Volunteers. Howth, Sutton and Baldoyle were sparsely populated a century ago and population density fifty years ago but a fraction of what it is now. Howth, Donnycarney, Artane and Swords combined had a single Company of about 110 FCA Reservists in my time.
Twenty three men from the Howth, Sutton and Baldoyle area  died with the British forces in the Great War.
The 1916 Rising, the courage,  discipline and humanity  of the insurgents,  and the murder of Irish prisoners, some,but not all of them insurgents, by British forces, effected such a change in public attitudes that within fourteen months the Lord Lieutenant wrote secretly to the Cabinet that John Redmond’s party was finished and the RIC reported that “the Republic” was on the lips of the young. In December 1918 Sinn Fein candidates pledged to a Republic took 73 of the 105 Parliamentary seats in Ireland,and those of them not in British jails met as Dail Eireann and ratified the 1916 Proclamation as promised. In 1920 Municipal, County Council and other Local Elections throughout Ireland gave Sinn Fein and Republican Labour candidates even more emphatic majorities.  But England wouldn’t stand for democracy and embarked on a war of murder, terror, and lying propaganda. The lying propaganda persists and has enlisted many Auxiilaries.
The parts played by men and women of the area in the 1916 Rising, the ‘Tan War and Civil War  I leave to readers to find out for themselves. Also the generally good and constructive roles played by Republicans and Unionists in the Howth District Council elected in 1920. It had 12 members, 5 from Sinn Fein, 3 Nationalists, 3 Unionists and 1 Independent.The tiny Jewish community was active in Sinn Fein and the National movement generally.
And young Alfred Willmore, who as a child first trod the boards with his contemporary  compatriot Noel Coward in their native London, learned Irish and taught the language in Howth.
There were one or two nasty individuals who lived in the district mentioned ach fagaimid siud mar ata siad.
I’m told the book is selling like hot cakes and a new edition will be printed shortly.
THE ROAD TO INDEPENDENCE
Howth, Sutton and Baldoyle play their part.
by Philip O’Connor
Published by Howth Free Press
310 pages
Numerous Illustrations
15 Euros.
Available from Books Upstairs, D’Olier Street, Dublin
Connolly Books  Temple Bar, Dublin
McDermott’s Pharmacy, Howth’
Country Kitchen & Surround, Sutton.
Supervalu,  Sutton Cross.
Book Haven, Sutton.
White House Shop, Baldoyle.

View all posts by Jude Collins →
Getting an Irish passport: a question of identity?
Danny Kinahan (Ulster Unionist MP) – just  a bit of a Twit or something more sinister? by Sammy McNally

One Response to ‘ THE ROAD TO INDEPENDENCE: Howth,Sutton and Baldoyle play their part. by Philip O’Connor. 1916 Commemoration Committee Howth Sutton Baldoyle’ by Donal Kennedy