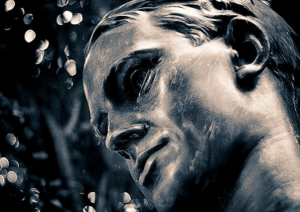 Although introduced by Charles Stewart Parnell as someone who was “a household name in Ireland” , Andrew Kettle MP is not recorded in The Dictionary of National Biography, that wonderful collection of lives connected with these islands these past 2,000 years.

The DNB a few years back issued a volume -“Missing Persons” which featured some, the significance of whose lives escaped the Editor’s notice on their deaths. Amongst these were the hero  of the 1913 Dublin Lockout, James Larkin, who died in 1947, and the   1916 leaders, Connolly and Pearse, shot by British  firing squads in 1916. Andrew Kettle’s son Tom, ex-MP for Tyrone, was also shot in 1916. The DNB did not record his death at the time, which is surprising, and by the time Missing Persons was published, by not making good its omission, it fulfilled his prophesy  that he would be regarded as a bloody fool, and Pearse and Connolly as heroes.

.For Tom Kettle was killed by a German bullet, leading a platoon of Dublin Fusiliers which had marched behind the Union Jack to Flanders.

Kettle’s biographer JB Lyons describes him as an Irish patriot, essayist, poet and British soldier. Robert Lynd, who knew him, said he had the gift of letters and the gift of politics, that he was  “a mathematician, an economist, a barrister and a philosopher, a Bohemian and a scholar.”

JB Lyons called his study “The Enigma of Tom Kettle.”

An enigma he remains to me, like the writer Patrick McGill, who could parade in khaki on St Patrick’s Day, march to “The Wearin‘ of the Green” and then stand to  attention for “God Save The King.”

Lyons records how Kettle, in his maiden speech in the House of Commons  argued that the Dublin Metropolitan Police be financed, not by Dublin ratepayers, but by the Imperial War Office. Soon afterwards in New York’s Carnegie Hall, Kettle shared a platform with the old Dynamitard/Terrorist Jeremiah O’Donovan Rossa and another veteran Fenian who had helped smash the prison van in Manchester when Police Sergeant Brett was shot dead, an incident for which three Fenians were hanged. Yet Kettle was to become the Pied Piper of Ireland, behind whom tens  of thousands of her children were to march to a futile death.

Robert Lynd, ( who incidentally a few months before Kettle’s death, in an appreciation of James Connolly, wrote that Connolly’s  ” was the most vital democratic mind in the Ireland of his day” ) quoted from a poem by  Kettle,  which has been deliberately neglected by his biographer and anthologists alike, which, he said    ” expressed Kettle’s mood to the end.”

The poem, written in reply to an English poet “who had urged the Irish to forget their history and gently cease to be a nation” is called “. Reason and Rhyme”. To do justice to Kettle’s memory, and to those whom he led to Flanders, it should be better known. It would illustrate why it is fitting that both he and O’Donovan Rossa are commemorated in St Stephen’s Green. –

“Bond, from the toil of hate we may not cease;

Free, we are free to be your friend;

And when you make your banquet and we come,

Soldier with equal soldier must we sit,

Closing a battle, not forgetting it.

With not a name to hide,

This mate and mother of valiant “rebels” dead

Must come with all her history on her head.

We keep the past for pride:

No deepest peace shall strike our poets dumb:

No rawest squad of all Death’s volunteers,

No rudest man who died

To tear your flag down in the bitter years,

But shall have praise, and three times thrice again,

When at the table men shall drink with men.