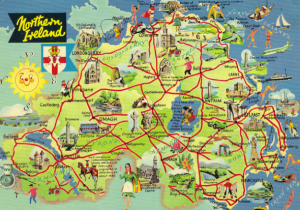 The missing element in the peace process is truth and reconciliation.

It is undeniable that Sinn Fein have been making just about all of the effort in this regard.  Can anyone say with any degree of modicum that the leadership of unionism have made even the remotest effort to reconcile with the rest of this island?

Unionism remains totally and absolutely intransigent to the idea of Irish unity or the fact that northern Ireland remains and always will be a part of Ireland.

Do they think that by insulting us, denying us an Irish language act or obstructing any moves to embrace that connection we will suddenly give up on our desire for Ireland to be a 32 county independent and sovereign nation?

Even now with the prospect of brexit leaving us with a potential economic catastrophe, they still refuse to contemplate the thought of unification to guarantee economic stability and reject outright the offer of discussing these issues in a forum as suggested by our Taoiseach.

What this means is our first minister is putting the union with Britain above the interests of our people.  Sure, this attitude will put nationalists off voting for the Stormont assembly, it will create division within the nationalist community over how much we are prepared to tolerate with some more frustrated than others – but is that what they want?

We have more and more people in the south now who would understandably be happy to build a wall around the border and get rid of us all for good.

I have in the past said here that we should be tolerant towards unionism, their flag burning and irrational need to have the union flag on every building every moment of the year but now I see that we simply cannot afford to tolerate this attitude any longer.

How can we expect there to be support for unification in the south while Stormont is led by yahoos who encourage bigotry in their words and actions, who support the building of huge infernos next to people’s homes so they can burn Irish flags, symbols and effigies as a blatant display of sectarianism?

The number of nationalists prepared to vote for such a farce is going to continue to decline.  This is a mockery of parliament and Stormont needs to be closed down and turned into a museum.

These problems are being created seemingly deliberately by unionism through their refusal to acknowledge the truth.

How many in the unionist community are even aware that it was unionism through Carson who introduced paramilitaries into Ireland and brought the gun into Irish politics?

How many know that Ireland expressed a democratic wish for independence which was overturned even against the wishes of the then London government who caved in over threats of violence and civil war?

How many know that unionism abused the power they were given and blatantly discriminated and controlled the wealth for 50 years in the gerrymandered state that their threats and violence rewarded them with?

How many know that it was unionism that started the conflict here between 1966 and 1969 with a  violent response over their objections of equality for Catholics who copied the success of the peaceful civil rights movement un the US where blacks achieved equality with the white supremacists.

Unionist supremacy is the last remaining bastion of sectarian discrimination that remains in the modern world and it should be rightly be an embarrassment for England and a reflection of the true face modern Britain which the rest of the world should consider when dealing with them.

Just as white supremacy was faced down in the US, unionist supremacy must not be tolerated any longer, not in Ireland and not by the nations of the world.

This has to end now.

View all posts by Jude Collins →
Enda and Arlene and Danny: something in the Summer air?
SHOCK AND HORROR AT THE TIMES! by Donal Kennedy