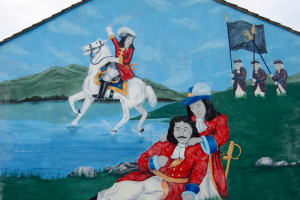 We all know Irish Unionism was founded on sectarian bigotry which has endured for centuries. In face of the prospect of home rule in Ireland where there would be a nationalist majority, the response from Unionism was Carson introducing paramilitaries into Ireland.

In face of a clear majority vote for independence in 1918, Unionism who had already committed mutiny against British rule in Ireland 4 years earlier now threatened civil war to ensure as much of Ulster that could be gerrymandered into a protestant state; which was delivered without referendum or the approval of the nationalists who remained having voted along with the majority in the election.  They were allowed to not only thwart democracy but also to misrule and discriminate for the next 50 years with only token resistance from a reduced IRA in the 50s which failed.

The unionist artificial majority was always on a timeframe to nonexistence, and in the 60s attempts at civil rights for Catholics risked accelerating this process by giving electoral equality to Catholics.  This risked the whole ethos of Irish unionism which was protestant control over Catholics and people like Ian Paisley could not allow that to happen.

Unionism reacted violently as it always has done, and starting killing, pogroms and mass counter demonstrations against peaceful civil rights resulting in the state forces murdering Catholics, helping groups of youths burn Catholics out of their homes in the thousands and when they lost control over the riots which resulted, they brought the British army over to restore control and then pushed them into conflict with nationalism.

The ensuing conflict was a dirty, bloody war in which republicans killed, bombed and maimed many people as did the British state forces and the loyalist paramilitaries they colluded with.

When peace was finally achieved, Unionism acted as it was the worst thing that could have happened, Ian Paisley who did more than any individual to start the conflict, prolong it and who proclaimed he would use the DUP as political cover for loyalist killings had the neck to demand sackcloth and ashes from republicans.

The IRA were made to decommission all weapons and even then a new political conflict ensued where Sinn Fein were to be demonised and made to take all of the blame for the troubles to which both states were only too happy to comply, particularly in the south with the full backing of the media.

When it became clear of the bona fides of Sinn Fein, we had the mockery of the police Chief Constable stating as much while at the same time backing the MI5 propaganda claim that the IRA were running Sinn Fein. Now, almost 20 years post Good Friday Agreement with the UK on the verge of breakup, Unionism is suddenly morphing into no more than a political view.

I have made no secret of my views that unionism is a sliding scale of bigotry, and that all unionists share the same DNA in terms of anti-nationalism in Ireland.

I suppose what I am asking myself is, is it fair to continue this opinion when young people may or may not be aware of Unionism’s past even though their political leaders have not made any effort to address their past and continue to promote sectarian culture. If unionism today truly is no more than a point of view, its whole foundation has now turned to sand.

But if that were the case, what would the problem be with a forum to discuss all of our futures post brexit? Is it simply a numbers game and when facing a terminal decline and facing irrelevance, only then will they change?

Unionism has yet to decommission weapons, has yet to acknowledge its role in the conflict and still makes no effort at reconciliation.

Will they ever  own up to their past?

Should nationalism let them away with not facing up to their past?

View all posts by Jude Collins →
Nice killings: why?
Ross Hussey and the morality police

114 Responses to ‘When is a Unionist not a Unionist?’ by Jessica McGrann