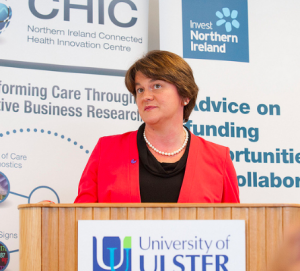 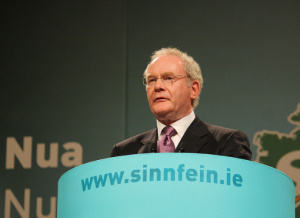 So here – who speaks for the north? Or Northern Ireland, if you’d prefer that terminology? On the face of it, that seems simple: the people voted into the Assembly  speak for us. But it’s at that point things get tricky.

Martin McGuinness told reporters the other day that he spoke for the majority of people in the north who had voted to remain in the EU –  56%.  A clear majority, then.

But First Minister Arlene Foster reminded Martin and the rest of us that she  spoke for the people of NI/the north; and to ram the point home, she reminded all that her party in the recent election had picked up 38 seats whereas Martin’s party had secured just 28.

So who’s right – who speaks for the north? Well if we go by MLA seats, there’s no doubt: Arlene speaks for the north. Mind you, her ten-seat advantage comes in part from those very lazy and very stupid nationalist/republican people who sat on their fat asses on polling day, whereas the DUP got its supporters down to the voting centre and made sure they placed their X where it should be. Regardless of that, Arlene does indeed speak for the largest party by far and therefore is entitled to say she’s talking for the majority.

And this is serious stuff. We’re not talking here about what flag goes up and how long or how often it should go up for. We’re not even talking about swaggering bandsmen and people pissing against the walls of Catholic churches. We’re talking about the economic future of everyone here, especially the young.  Theresa May, who was a remain woman, tells us that she’ll get in there and get the best possible deal for the UK.  That’s like someone hoking around with a teaspoon after your lovely big ice-cream  has been upended onto the germ-ridden footpath.

If we’re forced out of the EU – and at the moment it very much looks like we will be – do you think we’ll be better off? A moment’s thought about cutting yourself off from a 500-million-people market gives you the answer: of course we won’t, and it’ll take us ages to get any kind of alternative, let alone a superior alternative, to that 500-million mark.  For maybe the first time, the majority of people here in the north realise that an action by Britain will be totally contrary to our interests.

It’s hard to think of a time, except maybe during WW2, when the existence of the UK was so much at risk – and this time it’s from self-inflicted wounds. Like it or loathe it, the consequences of Brexit are what we’re all waking up to and will go on waking up to for the foreseeable future. And 56% of us think that these self-inflicted wounds are really wounds inflicted by Britain  – or Britain’s Tory party, to be exact.

This isn’t games or oneupmanship.  These are matters that will affect our lives and those of our children for decades.  No wonder Martin McGuinness claims to speak for the 56%. Because he does. And if this is ignored, and if Nicola Sturgeon’s leadership of Scotland is ignored,  the UK is going to creak  like some ancient giant framework that resembles a cage, before disintegrating and filling the air with its shattered fragments.

These are truly interesting times. Maybe Nigel and Boris should be thanked for giving us this reality check.

54 Responses to Who speaks for the north?