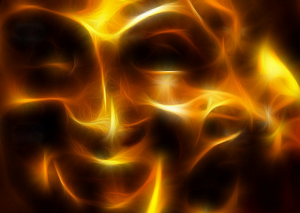 Everything is mystery. There is nothing that is not mystery. That’s the way life is. We live in Mystery, another way of saying we live in the eternal presence of God – and we die in mystery. That’s what good religion tries to capture and teach. That’s what the prophetic words of Jesus recorded in the Gospels convey. Bad religion does enormous damage to human minds and souls and communities. Bad religion tries to present everything as certain and sure and clear and logical! Bad religion is based on fear and control and threats of eternal damnation. Good religion is based on compassion and freedom and learning to be open to the mystery. We got a lot of bad religion over the years. Those in authority wanted to keep everyone under control. The old Lenten pastorals forbade people to dance! Parish Missions and some sermonisers used scare tactics -warning people about the dangers and horrors they faced in hell if they did not obey the rules. Children who were not baptised were condemned to Limbo. This nonsense caused many especially mothers plenty of anxiety. Most people did not take them too seriously but some did.

Many in the past made a mockery of the Christian religion. Back in the 1940s and 50s they often tried to beat religion into children. A poem by Brendan Kennelly gives a flavour of what went on in schools and passed for religious education.

Testing with his fingers the supple sally rod./“Explain the Immaculate Conception, Maguire,

And tells us about the Mystical Blood./Maguire failed, Mulcahy covered the boys head with his

Satchel, shoved him stumbling among the desks, lashed his bare legs till they bled.

“Who goes to hell, Dineen? Kane, what’s a saint?/Doolin, what constitutes a mortal sin?

Flynn, what of the man who calls his brother a fool?”/Years killed raving questions,

Kane stamped around Dublin in policeman’s boots. /Flynn was afraid of himself.

Maguire did well out of whores in Liverpool.

In this angry poem, Brendan Kennelly captures the fear, the brutality and the dreadful consequences of this kind of religion.

Bad religion is still being propagated, not by the bishops /the official church in Ireland, but by a determined bunch of mavericks who seem to have loads of money at their disposal. These fundamentalist mavericks produce so-called ‘Catholic’ newspapers which are dropped in churches every week unrequested and they are offered free of charge. They contain much that is bad religion. I often wonder who is paying for the printing and delivery. ‘The Catholic Voice’ and ‘Alive’ are not reputable Catholic papers. They are disgusting propaganda. I would ask people to refuse to read these free newspapers as they are generally hostile to Pope Francis and to the Second Vatican council. They should be used for lighting the fire and not for seeking inspiration or education. They are a total perversion of Church teaching and of the mystery of faith. The Irish bishops should stop them from being dumped in churches all over the country giving the impression that they are officially sanctioned by the Irish Catholic hierarchy. There is nothing Catholic or wholesome about these crude publications.

There is an urgent need for renewal in the Irish church in order to promote a healthy version of the Gospels. There are signs that this is already happening if only in a tentative way. It is a pity to hear this week that a reputable publishing company like Columba Press which has published some ‘good religion’ books exploring the Mystery of faith has gone into receivership.

It seems that many in Ireland have rejected the faith of their fathers and mothers. Perhaps it was not hard to reject an immature faith. Perhaps many were hurt by the Church and many wee disillusioned by the child abuse scandals. In a way it is a miracle that so many still adhere to the Catholic faith. I think the more people discover the mystical side of the faith and the more they see the positive and caring side of the Catholic faith as presented by Pope Francis, the more people will once again rediscover the richness and consolation of the faith. Until recently, the mystical side of our faith had almost vanished. Thankfully it is making a comeback.

View all posts by Jude Collins →
Michael Noonan: are you Nanki-Poo in disguise?
‘ HISTORICAL LETTER FROM HISTORY IRELAND (May/June 2009)’ by Donal Kennedy